Bobi Continues To Deceive Ugandans That Elections Will Bring Change 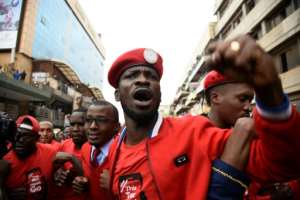 The Uganda presidential elections were held a year and a half ago, and the divisiveness, lies, and downright ignorance during Bobi Wine's gamble has actually multiplied in intensity since then. The moral revisionism most Nupians propound is more than astonishing. In fact, there are no terms suitable to describe it.

Back in 2018-2020 it wasn't surprising that there was a massive amount of ignorance and misinformation about Besigye and FDC, after all, Nupians ensured that they sold their party by portraying FDC founders and leaders as moles working for Museveni.

I won't repeat Besigye’s comments on ‘Twebelelemu’ in 2018 lest I perpetuate the misrepresentation. For what it's worth, I still think his comments were misjudged despite subsequent clarifications and apologies. It's too bad that so little of his(Besigye's) work is generally available in books and videos, although you can still get such important and interesting information from newspapers and the book, ‘ Kizza Besigye and Uganda's Unfinished Revolution ’.

Bobi himself was part of the propaganda machine against Besigye. As a result, I lost a significant amount of respect for him over this -- certainly not as a musician, but as a person. Besigye, in my opinion, handled this disdain like a true gentleman, never allowing himself to sink to Bobi's childish level.

Most Ugandans, especially in the central, simply can't be blamed for their ignorance given that the NUP leaders didn’t help them to understand the intricacies of a massively complex election, especially when they resorted to hyper-partisan propaganda (fake news, distortions, false promises, outright lies ...) rather than explaining what elections mean for the opposition in Uganda, why Besigye and FDC have been participating in them, and what people should expect after elections.

However, 16 months after elections, it is absolutely unforgivable for NUP leaders to continue deceiving people that elections work and would bring change in Uganda. Last month, I watched a video where Bobi was telling people to concentrate on Omoro byelections and elections of women representatives instead of joining Besigye on streets. It’s unfortunate that he doesn’t want to tell people about the political realities of the situation we're in.

Now we face the alarming prospect of one of the biggest liars during the 2020-21 presidential elections presenting himself as again a presidential candidate in 2026, and he will still spread lies and confusion about elections. If Museveni plans for his son, Muhoozi Kainerugaba, to stand in the next elections, then this was well planned in advance, and I think its high time we all agree that he is a political genius.

Another election is always an incredibly risky prospect without reforms to the electoral laws to dissuade electoral lies and cheating, without new rules to clamp down on social media fake news, and to have an independent electoral commission. Bobi wants Ugandans to continue participating desperately in rigged games with a belief that change is coming when there's virtually no chance of that actually happening. All he cares about is his new position as leader of NUP where he has designed a salary for himself through monthly cuts from all his party MPs, and gets to travel around the world in conferences where he's invited.

While Besigye and FDC had spent the last ten years relentlessly working to make sure that Ugandans lose faith in elections, and start embracing the ‘defiance’ approach, Bobi has wasted their energy on pleading for more election gambles. This is one of the main reasons why a lot of people believe that he works for Museveni.

Whether Bobi's lies and misinformation about the Elections are motivated by ignorance, selfishness, mendacity, or a bit of all three, it's a terrifying indictment of our country that such a transparent bullshitter stands so close to our politics.

It's an indictment of the NUP party for causing this chaos in the first place, and then picking the spectacularly incompetent Moses Kibalama to somehow make the mess even worse, then binning himself and replacing himself with someone even worse again. Now, Kibalama is desperately trying to get his party back but in vain.

But anyone capable of self-reflection should also be thinking what role did people like me play in the absolute mess we've got ourselves into? Did I do enough to help try and stop it? Have my actions actually exacerbated this mess?