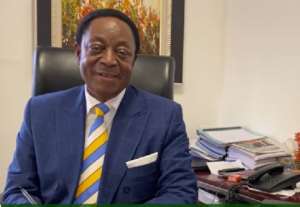 Former Governor for the Bank of Ghana, Dr. Kwabena Duffuor has implored government to go to IMF but ensure it negotiates for a very good programme.

Speaking to Starr FM on the StarrChat programme, the former Finance Minister stressed that it is untrue for anyone to suggest that enrolling on an IMF programme will affect the growth of the Ghanaian economy.

According to him, if the government negotiates a very good programme with the IMF, it will help stabilise and facilitate the growth of the economy.

“There is no problem with the IMF program and unemployment has come down. The fear is that if we get to the IMF program they will not let us employ citizens. But this depends on what you negotiate, we were employing people in the health sector and the education sector.

“Otherwise, unemployment could not have dropped to 2.2, otherwise the cedi could not have been so stable for over four year period and our economy could not have grown so high. The GDP was first class,” Dr. Kwabena Duffuor said on Wednesday, June 22, 2022.

The former BoG boss continued, “So I don’t think the problem is with the fund per say but the nature of the program must be looked at carefully. You have to negotiate properly. Because right now, yes the economy has done well at 5.5% GDP growth even though we were expecting more than that.

“The budget deficit was supposed to be 12%, inflation is above 27plus. The cedi since January has gone down by 15% and our debt to GDP ratio is also not good. IMF can’t destroy our economy because during my time we were under the IMF and our growth was the best.”

Despite similar calls from various finance experts and economists, the posture of the government is that going to IMF for a bailout is not an option.

As reiterated severally by Finance Minister Ken Ofori-Atta, the government will use home-grown solutions to bring life to the ailing economy.

Hottest Photo Reports
Catch up with all the political quotes from our politicians.
Advertise here
More from Headlines
ModernGhana Links
'Rather than turning yourself into AG's interpreter help Energy Minister to be transparent' – ACEP blasts Kofi Abrefa
Time for Ghana to leverage our digitization for digital manufacturing - Bawumia
‘Aduro woso’ health walk was independently organised – Alan Kyerematen
TOP STORIES