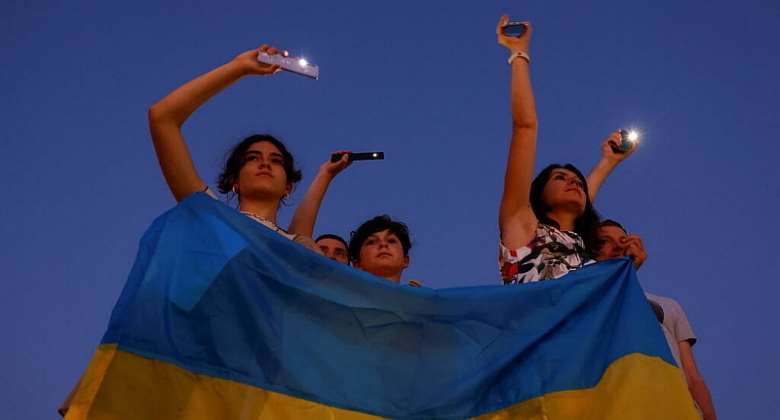 European leaders gathering in Brussels are expected to formally grant Ukraine "candidate status" to join the bloc on Thursday - a symbolic move in a process that could take decades.

Ukraine's bid to join the European Union is the top order of business for leaders, who are widely expected to agree as early as Thursday, the first day of a two-day summit.

The Netherlands, Sweden and Denmark had been sceptical about starting accession talks while Ukraine was fighting Russia's invasion, but the European Commission's endorsement last week helped shift their perspective.

Ukrainian President Volodymyr Zelenskyy said he had been conducting a "telephone marathon", calling up 11 European leaders Wednesday, following calls with nine the day before.

He said earlier he believed all 27 EU countries will support Ukraine's candidate status.

"We deserve it," he told crowds in Amsterdam via video link, and the move would be “a big motivational factor for the unity and victory of the Ukrainian people.”

EU candidate status can be granted only by a unanimous accord by member countries, and is just the first step toward membership.

It will take Ukraine at least a decade to meet the criteria for joining the EU, which involves satisfying political and economic conditions.

European officials have said that Ukraine has already implemented about 70 percent of the EU rules, norms and standards, but have also pointed to corruption and the need for deep political and economic reforms.

Meanwhile, on the ground Russian strikes on Tuesday and Wednesday on the Ukrainian city of Kharkiv, near the Russian border, were the worst for weeks in an area where normal life had been returning since Ukraine pushed Moscow's forces back last month.

Ukrainian presidential adviser Oleksiy Arestovych said in a video address that Russian forces were hitting Kharkiv to try to force Ukraine to pull resources from the main battlefields in the Donbas to protect civilians.

In his nightly video address released early Thursday, Zelensky said there were massive air and artillery strikes in Donbas,

Russia, he said, wants "to destroy the entire Donbas step by step."

He again pressed for the rapid supply of arms from Western allies.