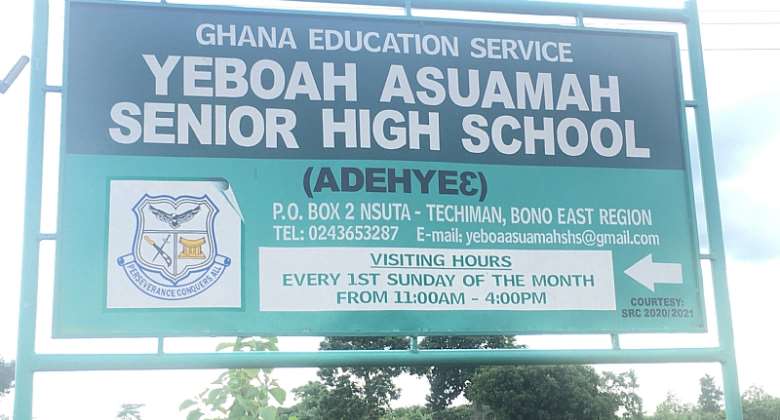 The ordeal of students at the Yeboah Asuamah Senior High School has become unbearable as they struggle with high malaria infections in the school. Many of the students are not able to participate in effective academic work due to frequent infections of malaria.

The school with a boarding population of 626 has more of its students including staff on admission at the Nsuta Health Center treating malaria and this has however been affecting effective academic work and other extra curriculum activities.

Students in the school have over the years been suffering from this particular issue and efforts by the school authorities to address the problems always prove futile.

This reporter in its quest to find out why most of the students were missing from the school revealed that the school is a potential ground for high malaria infections.

A visit to the school by this reporter on Tuesday at Nsuta in the Techiman South Municipality indicates that Yeboah Asuamah SHS was a community-led initiative school established in 2011 and was absorbed by government in 2013. Since then, the school has not been given any attention when it comes to infrastructural development.

At the boys and girls' dormitories which is a community-led initiative also revealed that students do not have beds to mount their mosquito nets to sleep in and due to this, students put their mattresses on the bare floor under the mercy of mosquitoes.

Mr Kuffour Kalid Abdullah, Headmaster of the School confirmed and expressed worry over the situations which keep persisting over the years affecting academic progress.

Mr Abdullah lamented that the school is currently overpopulated due to inadequate infrastructure including classroom blocks, dormitories, staff common room, a dining hall and an assembly hall to help facilitate the smooth running of academic work.

Mr Abdullah mentioned that most of the structures including the improvised dining hall, teachers' common room seen on the compound were community-led initiatives. He indicated that government has not yet given the school the needed infrastructure to operate well.

He told this reporter that the school is currently in-dying need of a six-unit classroom block to house most of the classes. He expressed fear about how to accommodate next year’s admissions since the school does not have enough space among other things.

In an effort to address the school's problems, the headmaster hinted that a committee has been set to meet the Deputy Minister for Local Government and Rural Development who doubles as Member of Parliament for the area Mr Martin Adjie Mensah-Korsah on the issue with the hope that something good could come out.

“In view of this am optimistic about the school’s potential to produce good human resources to contribute to building the country and that the need to support it growth would be a favour to the state and the Ghanaian community.

“The School has 270 boys and 356 girls studying various programmes including general arts, business, agriculture, science and home economics”, he hinted.

Speaking to some affected students, Master Eric Amoanteng Senior, Godfred Amoah, Justice Eli and Issaka Amadu both first years from the General Arts department who had just returned from hospital and could not attend classes due to the malaria infection noted that the issue is affecting their academic work and needs immediate attention from stakeholders.