By Cletus Abaare || The National Tribute 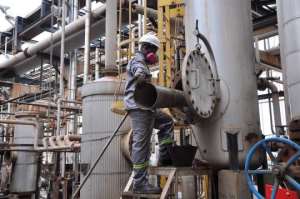 Mr. Jerry Kofi Hinson, the Managing Director (MD) of the Tema Oil Refinery (TOR) which has been comatosed and saddled with huge debts has apologized to six (6) workers who were accused and interdicted for causing financial as well as product losses in excess of GH¢20 million.

This comes after the six workers out of the fourteen workers who were interdicted have been exonerated of any wrongdoing after a series of investigations by management of Ghana’s only oil refinery.

A letter dated 17 th June, 2022 and signed by the MD, Mr. Hinson to the cleared staff sighted by this portal stated that “You are hereby declared fully exonerated from the incident and are being requested to report to work on Tuesday 28 th June, 2022.

“We apologize for every inconvenience caused, and we wish you all the best as you return to work,” part of the letter reads.

Another letter to a senior staff from the Finance department in our possession stated, “By a copy of this letter, the Acting General Manager (GM) for Finance is requested to restore your full salary and benefits from the date of interdiction to date, as per the Human Resource Management, Administrative Policies, Systems and Procedures Manual Section 6.3.1 and Article 55 Section 7 of the Collective Agreement between Tema Oil Refinery (TOR) and the Union of Industry, Commerce and Finance Workers (UNICOF).

"Management recognizes the inherent difficulties you have encountered in having to stay away from such anxious circumstances and is appreciative of your patience.”

It is recalled that TOR has not been operational for some time now due to a myriad of challenges. Early this year, the refinery queried and interdicted some of its staff pending the conclusion of investigations into the disappearance of fuel, product storage and transfer losses at the refinery.

This was part of recommendations by an Interim Management Committee (IMC), which was inaugurated in June 2021 to oversee the affairs of the company as part of the government’s efforts to restructure the company.

The investigations by the IMC revealed a number of incidents related to product storage and transfer losses, including but not limited to the disappearance of 105,927 litres of gas oil on 4th September 2021, which belongs to a BDC client.

According to the IMC, there was also the disappearance of 18 drums of electrical cables worth GHS 10.4 million from the Technical Storehouse of TOR, discovered in April 2021 as well as the disappearance of LPG belonging to a client between 2012 and 2015, as a result of which TOR became indebted to the client to the tune of $4.8 million.

The IMC recommendations which led to the interdiction of fourteen (14) staff also alleged “loss of Naphtha to a BDC client”, and the wrongful loading of 252,000 litres of Aviation Turbine Kerosene (ATK), instead of regular Kerosene into BRV Trucks at the loading gantry between 21st and 25th September 2021.”

The IMC which was chaired by Mr Nobert Cormla-Djamposu Anku, with Messrs William Ntim Boadu and Okyere Baffuor Sarpong as members, was put in place in June this year, after the Energy Minister, Dr Matthew Opoku Prempeh, had relieved the substantive management members of their positions.

It was tasked to, among other things, ensure smooth transfer from the outgone directors, undertake technical and human resource audits, as well as receive and assess viable partnerships for TOR, if any.

Our reliable sources at the Refinery indicate that the fate of some of the remaining interdicted workers as well as other top General Managers and managers will be determined by the Board by the close of this week.

Hottest Photo Reports
Catch up with all the political quotes from our politicians.
Advertise here
More from Oil and Gas
ModernGhana Links
Fuel prices to decline but Cedi fall will water down impact – IES predicts
Fuel prices to go down from August 1
Renewable Power Remains Cost-Competitive amid Fossil Fuel Crisis
TOP STORIES

'Men should admit failure in leadership and pass on the mant...
35 minutes ago

There're several people in NPP, try them as well — Dr Amoako...
54 minutes ago