This Is Why Besigye Has Been On Streets Again 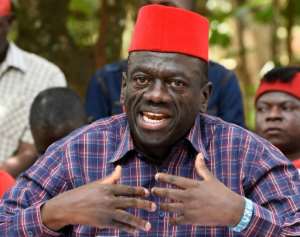 FDC has been taking an absolute hammering since 2018 due to attacks, propaganda and fake news by both NUP and NRM bloggers. Besigye has been on streets twice so far this year protesting against the increase in prices of goods and services in the country, and the conditions of workers, but the two groups (NUP and NRM) are at it again attacking him. ‘Poor’ man is in prison again as bail was denied till next month!

There's no guarantee that Besigye would win anything by protesting, but, I believe, his reasoning is that if we don't finally start putting up a bit of resistance to this insatiable greed by those working in govt, it's an absolute certainty that we'll continue to lose or suffer. Anger at injustice is a fundamental driver of political and social reforms.

It's going to get a lot worse – I can see prices of goods going up, and I believe most people in power don’t care. Sorry to be negative but I don't see any political consciousness among the vast powerful majority.

We have had it so bad for so long, we know what it means to be poor, to die if you get ill and can't afford treatment, to be instantly dismissed from employment at the boss’s whim, e.t.c. This is the case for most of the Ugandans.

Here in the UK, workers’ rights have been fought for by unions. Businesses don’t just hand them over. Some would gladly fire their staff and hire cheaper labour. If it wasn't for unions, the gap between the haves and have nots would be significantly wider. I loved Bob Crow’s response when Andrew Neil mentioned that rail workers striking for 2 days cost the economy £100m. He basically said, “that’s an admission that rail workers are worth £50m a day to the economy”.

In Uganda, I don’t know which specific organisations are really fighting for workers’ rights. I spoke to a friend of mine recently who’s a primary school teacher in Iganga. She said that teachers were on strike, but she couldn’t afford to join in. So, she remained working at school.

Nobody wants to strike and lose a day's wage or salary, but when businesses making large profits aren't rewarding their staff fairly, a damaged balance sheet is the only thing the higher ups will listen to. I read that in Japan, the bus drivers went on strike but basically kept the buses running as normal, they just let everyone on for free. Superb idea as the only people who are hit are those making the big money at the top of the pile.

What is worse in Uganda is when the MPs give themselves a pay rise with no real tangible evidence, they do any work, moreover when things are so bad in the country. The recent salary increases and the shs.40m bonus for each MP was a tragedy.

Basically, Politics has become the number one top business in the country; even the NUP leader, Kyagulanyi, reportedly designed his own way of making money from his MPs and the party. Apparently, every MP contributes some good money to his bank account monthly, and that is something I had never heard of till now. And when I read that he wanted MPs to refund the money, I assumed that was pure parody? He makes money out of them and govt (IPOD and stuff), but he doesn’t want them to make money out of the govt?

The real question is who put all of us in this situation? Yes, the Ukraine - Russian war is partly to blame but the government also can’t escape the blame with its lack of foresight, poor management of the pandemic and the economy, the irrational lack of fair taxation of the super-rich. Things were already going bad before the war.

Unnecessary taxes(e.g. Internet taxes, rental tax, Landlord tax) have automatically increased the prices of goods and services. I've no issue with cigarettes and alcohol being massively taxed, I'd happily see the tax on those quadruple as they provide zero benefit to the world or society. Fuel, however, provides society with energy for technology to perform a function, whether that's transport, production, healthcare, etc. Health workers are considering strike action, too, as they can no longer afford the price of fuel, almost half of which is tax imposed by this government.

Also, the mentality of those that vote for NRM is also a problem. They choose to only see the immediate impact on them rather than seeing the greater good of a large group of people willing to make a stand against a failing system. They have been trained to obey the thinking of the party that constantly tells us they are better for the economy. So long as people refuse to critically analyse their situation and the standards to which they appraise it, they get the government they deserve.