Geopolitical Resetting: BRICS PLUS versus G-8 in New Global Configuration 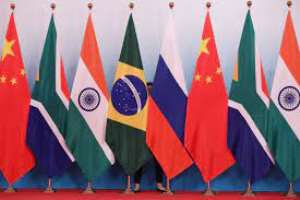 This article attempts to contribute to the debate on some aspects of the evolutionary processes and the search for new possible models by a few countries that are dissatisfied with the unipolar system and the world dominated by the United States.

The United States has outstretched its political and economic interests around the world, China has similarly and strategically extended its tentacles across both the Atlantic and the Pacific. It has moved south conquering Africa and intensifying commercial operations in the Central Asia regions including the former Soviet republics - the backyard of the Russian Federation.

However, Russia considers itself a global power. While still struggling and raising its shoulders, many experts say, it has little global influence and is authoritarian compared to China.

Despite its large population of 1.5 billion which many have considered an impediment, China’s domestic economic reforms and collaborative strategic diplomacy with external countries have made it attain superpower status over the United States as Kestér Kenn Klomegâh, Special Correspondent, Communication for Development and Advocacy Consult (CDA Consult) based in Moscow captured.

While the United States’ influence is rapidly fading away, China has indeed taken up both the challenges and unique opportunities to strengthen its position, especially its trade, investment, and economic muscles.

Monitoring mainstream news and information reports indicated that Russia has been teaming up with China and India (and that could be interpreted as BRICS platform initiative) and a few other external countries in the process of establishing a new global economic system.

On the other hand, it aims to break the unipolar system and defeat American hegemony around the world. Some experts have argued that successive White House administrations have maintained the status quo. Due to socialist economic planning and their advancement of the notions of international cooperation and peace even among states with varying social systems, there has been tremendous progress in the areas of international solidarity.

The Brazil, Russia, India, China, and South Africa (BRICS) grouping is a manifestation of the role of Beijing, Moscow, and Pretoria along with the other states which have varied in their political orientation in recent years. These new alliances are perceived as a threat to the role of the United States, Britain, and the Europen Union since they are not participant members and cannot directly impact the agendas and goals established by the BRICS.

But a careful study and analysis monitored by this author vividly show that Russia has some limitations. Its external economic footprints are comparatively weak. And its external policies are hardly promoting its economic models.

The geopolitical reordering of the world cannot simply be achieved through war or challenging the West's political influence in its various global domains. The economic component is possibly the most significant of the ongoing tug of war between Russia and its western detractors.

In the global South, for instance, Russia is still struggling to win the hearts of leaders. It however needs an excellent broad public outreach policies to permeate the message of new global order, at least, to the middle class.

It has to enlist the understanding of its aims using the communication tools in addition to its’ diplomatic statements and globe-throttling juicy rhetoric. Russia has to invest in all these if it really wanted to succeed in leading the world.

As Dr. Ramzy Baroud, a journalist and the Editor of The Palestine Chronicle, wrote recently "the Middle East, especially the Gulf region, is vital for the current global economic order and is equally critical for any future reshaping of that order.

If Moscow is to succeed in redefining the role of Arab economies vis-à-vis the global economy, it would most likely succeed in ensuring that a multipolar economic world takes form. Russia is clearly invested in a new global economic system, but without isolating itself in the process."

In the past few months, Russia exited many international organizations, instead of sustaining its membership and using those plaform to propagate its new global mission.

Some experts and academics describe Russia making a desperate attempt at reversing the alarming trend in the world's economic affairs. In order to win this battle, Russia needs a designed geopolitical outreach scheme and strategies for exert economic influence to match its dreams. It has rather gone into self-isolation, with much heavy-handed criticisms against the United States and Europe.

With the rapid geopolitical changes leading to repartitioning and creating new global order, and Russia, over the course of the last decade, has been desirously strengthening its Greater Eurasian Union alongside with others, such as the Collective Security Treaty Organization (CSTO) and BRICS.

The Greater Eurasian Union focuses on the economic integration and supporting economic development among the members, and expected to build its structure and method of functions by replicating the European Union.

The CSTO, a military alliance consisting of mostly the former Soviet republics (Russia, Armenia, Kazakhstan, Kyrgyzstan, Tajikistan, and Uzbekistan), and signed the Collective Security Treaty in 1992. Its primary task is to collectively depend the territorial sovereignty of these member states.

The BRICS member countries (Brazil, Russia, India, China and South Africa) collectively represent about 26% of the world's geographic area and are home to 2.88 billion people, about 42% of the world's population.

Historically, the first meeting of the group began in St Petersburg in 2005. It was called RIC, which stood for Russia, India and China. Then, Brazil and subsequently South Africa joined later, which is why now it is referred to as BRICS.

South Africa was a late minor addition to the group, to add a "bridgehead to Africa" says Charles Robertson, Chief Economist at Renaissance Capital. All the BRICS countries are facing economic challenges that need addressing urgently. The BRICS is keenly aware of the importance of contributing to Africa's development agenda.

"So, it could expand because the BRICS are under-represented in the global financial architecture. Europe and the United States dominate institutions like the International Monetary Fund (IMF) and the World Bank, and to some extent many others," explained Robertson.

According to him, "Russia and others in the BRICS would like to see larger power centres emerge to offer an alternative to that Western dominated construct. That is reasonable enough - providing there are countries with the money to backstop the new institutions, such as China supporting the BRICS bank, and if the countries offer an alternative vision that provides benefits to new members."

"Now is a very good time to show that BRICS members and relations between them are an alternative to the format existing in the West," Executive Director at the Russian National Committee for BRICS Research, Professor Georgy Toloraya, told the Kommersant, a Russian daily business newspaper, adding that "BRICS favours order, compliance with agreements and development."

Moreover, plans are in store to expand the group to include Argentina, Turkey, Indonesia and some other African countries. According to Toloraya, India is currently opposed to expanding BRICS fearing that new members will support China.

On the other hand, Moscow argues that "the entrance ticket" to the group is independence and sovereignty, and under no circumstances, potential candidates be called China's satellites.

There are not so many countries like that—they would include Indonesia, Mexico, Turkey, Egypt and Iran.

But then, there are certain political requirements for new members, including recognition of BRICS values and core foreign policy principles, he said, and added "initially, the goals and tasks were very modest, primarily focusing on the economy and the coordination of efforts toward attaining more ambitious goals."

Franklin Cudjoe back calls for probe into Covid-19 expenditu...
40 minutes ago

North East: One killed in clash between two communities
40 minutes ago