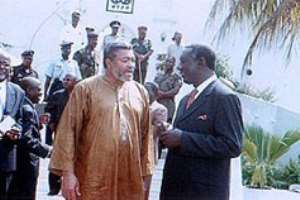 Hypocrites, all of you hypocrites, you'll gonna pay the price some day – Jimmy cliff To have members of Kufuor's administration and some members of the public state that they are against insulting the presidency is the "pinnacle of Hypocrisy" in Ghana. Where was their concern for the presidency when Kufuor and his cronies called (and keep on calling) Rawlings all sorts of unprintable names? Former president Rawlings cannot be blamed for disrespecting the presidency because, that has been the trend, which was started by the Progress Party (PP) and perpetuated by NPP under Adu-Boahene and John Agyekum Kufuor. If Kufuor's corhots and sections of the media (mainly the Govt-owned and NPP sponsored) are so concerned about insulting the presidency, why were they silent when the following happened? President Kufuor called Rawlings a punk, thief & devil (“sasabonsam”) at an NPP rally in Takoradi in 2004 President Kufuor told other African presidents that Rawlings is a thief –something he's still not been able to prove, despite his numerous attempts Kufuor called Rawlings a murderer, while he was in opposition. Did the president forget “innocent until proven guilty” or he was simply excercising his right of free speech? NPP-sponsored papers refered to Rawlings' mother as a prostitute and Kufuor (head of the party) failed to call them to order At the castle, before the moderator of the Presbyterian Church Rt. Rev. Frimpong Manso, Kufuor said "undesirable element found their way to the presidency". Is this not an insult? Dr. Charles Wereko-Brobby, on a political platform with then candidate Kufuor said, 'I am holding the shoulders of my uncle and together we are going to drive away the Satan of Ghana who goes by the name JJ Rawlings' Jake Obetsebi-Lamptey called Rawlings many unprintable names, at an NPP rally, attended by Kufuor. The president simply sat there and grinned. The Statesman – owned by Foreign minister Akuffo-Addo - captioned, "Kufuor warns of major explosion", in which the then candidate, Kufuor heaped insults on the former president and his cabinet for increasing petrol prices from ¢6,000 to ¢6,400, calling him a vampire, criminal and an insensitive person Rev Antwi of Methodist church called Rawlings the devil. Who made hin God? Ministers and Christians used all sort of theological jargons to protray Rawlings as a demon during the 2000 elections. etc What on earth made them think they had the right to do so? That the main players in the condemnation of JJ is enough to make you throw up. What a despicable display of hypocricy and pure political pandering. How dare they talk about respect for the presidency? Respect for whom? For leaders who have been elected to protect our interest and are now protecting their own interests and the interests of relatives. The ultimate lesson here that is over the heads of most of the public is that this government is defining that your right to insult the president begins and ends when Rawlings is in power, but during the reign of Kufuor, government can and will take that right away when it serves their agenda. Two wrongs do not make a right, but then Kufuor and his corhots need to wise up and learn that free speech is one of the tenets of DEMOCRACY. Views expressed by the author(s) do not necessarily reflect those of GhanaHomePage.