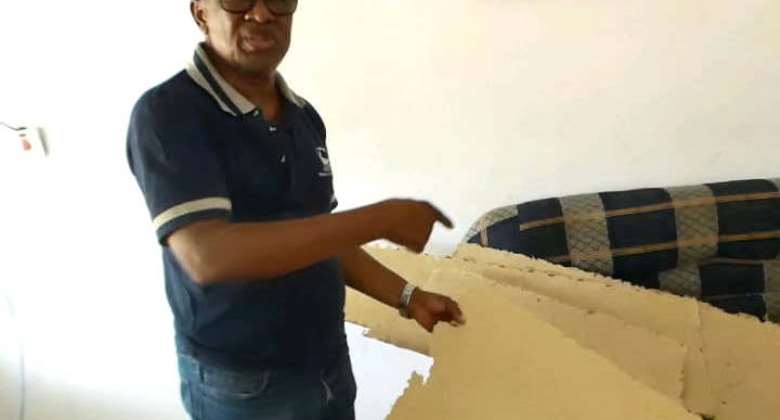 To what looks and sounds like the first of its kind in the entire African continent, the President of the Millar Institute for Transdisciplinary and Development Studies Prof. David Millar, and his Institution have identified a solution for nuisance grass wastage, especially for those in the northern part of Ghana.

Prof. David Millar explaining and displaying his grass converted brown paper to Apexnewsgh.com during our visit.[/caption]

Something that is treated by the citizens as a nuisance waste will soon become an essential commodity, and this is because Prof. Millar through research has identified that the grass we normally described as a nuisance waste could serve as a life-changer to citizens in most communities across the country and the world at large.

Professor. David Millar during, a One on One exclusive with this reporter at his office on Thursday, June 2, 2022, said, he wants the attitude and behaviors towards grass to be transformed into one that is generating resources and opportunities to alleviate poverty and improve livelihoods.

Engaging him more about the conversion of grass into brown paper production, he said: “In our research, the focus is to make the research as relevant as possible for the jurisdiction in which we find ourselves and we are situated in the grassland Savanna Region and the major material that is common to all and easily accessible is grass."

He added, "So, in our endeavor to create an agenda for research, we opted for looking the possibility of initiating a grass industry for northern Ghana, an industry that would take advantage of the commodity that we have widespread and also, that would involve all categories of persons, all stakeholders will be key players in that industry and hence, the grass came out strongly as a common commodity."

According to Prof. Millar, their investigation shows that as far as the communities are concerned, grasses are a nuisance and during a certain time of the year, they don’t see what can be done to grass. "Because of that they subject it to bush fires or burning and they ended up destroying the commodity called grass."

He stressed, “As scientists if you are able to look at this so-called nuisance and transform it into an essential commodity, won’t it come along with a management regime that will help prevent the annual ritual of burning grasses? So, that is one of the strongest motivations we have for embarking on grass development or if you like grass economy.

“We want the attitude and behaviors towards grass to be transformed into one that is generating resources, generating opportunities, alleviating poverty and improving livelihoods."

He continued, "So, we embarked on looking further into what the possibilities are. We started with the grass charcoal in order to develop grass breakers that will replace tree charcoal in terms of renewable energy and we are very far gone with that. We have some experimental samples we have produced.

"So, while doing that, we also thought that we should address the issue of environmental pollution. We have all these plastics that are all over the place, all over the country, we appear not to have any solution towards dealing with the menace of plastics and we are also afraid to institute laws because we have no alternative.

"It doesn’t make sense when you put a law banning an item when you don’t have a substitute, the law becomes an abattoir around people’s necks and you create a lot of management problems. So, we said, we would start working on this alternative to plastics and hence we decided to start experimenting with the transformation of the everyday grass, the conventional, and the grass that is burned into paper and I must say we have some interesting results to show."

Prof. Millar further revealed, "Right now, we are still at the stage of developing a brown rough paper and we expect to arrive at the brown smooth paper and then we think of other light forms of paper. Besides the plastic replacement, the brown paper can still serve as envelopes, toilet rolls and many other opportunities that the paper can serve as cardboard boxes and means of packaging.

"So, the various windows that are open to this small enterprise and we anticipate a very rapid growth of the enterprise and an enterprise that will deal with environmental issues, social issues, livelihood concerns and even poverty because we normally purchase the grass from the communities.

"So, there are all these arrays of benefits that go along. Men can easily sell grass if there is a grass market, women can sell grass, old ladies can sell grass and even children going to school can sell grass. If they have a problem paying school fees, you can take a load of grass go and sell and the child might even be in the position of paying the school fees for himself. So, these are the benefits of this enterprise we have started.

During the dry season, most parts of the country especially in the north experienced terrible bush fire burning which normally caused a lot of havoc to farmers who mostly appeared victims after losing their produce for the year. But with this development, the frequent bush fire burning is likely to reduce drastically because, community members and land owners will take their grasses more serious because, it has become a commodity and no more waste."

However, asking whether the wonderful grass initiative has received any form of collaboration or support from the government?

Prof. Millar responded: “I must say, this One District One Factory (1D1F) thing, this is one factory that has multiple effects. The district could easily order waste bags, which would give them an opportunity to rule against plastic bags. District Assemblies can now say, no more plastic bags because we now have paper bags in the market. So, this is a good point you have raised, we have not reached out to them yet but, from the sharing of information and experience, we will get to that level as well."

Hottest Photo Reports
Catch up with all the political quotes from our politicians.
Advertise here
More from Business Features
ModernGhana Links
4 out of 5 Africans say recent developments in African technology has changed how they view the continent
British magazine The Economist stresses Ghanaians' disillusionment with the government's financial measures
AfrikPage.com one of first English and French online newspapers in Ghana
TOP STORIES