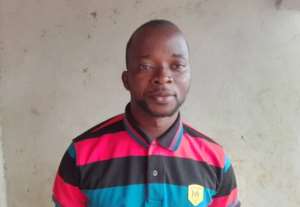 Abuja, June 14, 2022 – Authorities in Sierra Leone should drop their investigation into journalist Sorie Saio Sesay, return his mobile phone, and allow him to work freely, the Committee to Protect Journalist said Tuesday.

On May 26, police officers in the northwestern Kamakwie district arrested Sesay, a reporter with the privately owned Okentuhun Radio FM broadcaster’s “Latest Happening” news program, seized his phone, and detained him, according to news reports and the journalist, who spoke to CPJ in a phone interview.

Authorities transferred Sesay to the police headquarters in Freetown, the capital, and released him on bail on May 31, he said, adding that the case stemmed from a message he forwarded to the Latest Happening WhatsApp group, which he runs and where he shares information about stories he covers on-air.

As of June 13, police were continuing their investigation but had not cited any specific laws he was alleged to have violated, and had not returned his phone, he said. National police spokesperson Brima Kamara told CPJ via text message that investigations were ongoing and authorities had not decided whether to charge him with a crime.

“Sierra Leone authorities must immediately drop their investigation into journalist Sorie Saio Sesay and swiftly return his mobile phone,” said Angela Quintal, CPJ’s Africa program coordinator, in Durban. “Rather than seeking to gag the press with cybercrime and incitement allegations, police in Sierra Leone should focus on ensuring the safety of journalists in the country.”

On May 26, Sesay forwarded a user’s comment to the Latest Happening group from a WhatsApp group affiliated with the news website Calabash Newspaper about a conflict between motorcycle taxi drivers and police over the alleged police killing of a driver, he said. Sesay told CPJ that he later learned that the comment contained inaccuracies.

Later that day, while Sesay was on assignment for the state-owned Sierra Leone Broadcasting Corporation, where he also contributes reporting, the Kamakwie police called and summoned him without giving a reason, he said.

Sesay left that assignment and went to the police station, where officers seized his phone and took him to another station in the city of Makeni, where they held him overnight and interrogated him at 3 a.m. about the comment he forwarded, which they said constituted incitement, Sesay said.

Sesay said the officers then transferred him to Freetown, where he was held for four more days and told that police were preparing to charge him with cybercrime.

Sasay told CPJ that he was released following interventions by the Sierra Leone Association of Journalists, his family, and friends. From May 31 to June 6, authorities said he was required to remain in Freetown and return to the police headquarters each day for questioning by the cybercrime unit while his case was pending. Sesay said the cost of living in Freetown and paying for transportation to the police station was a strain on his finances.

On June 6, police allowed him to return to Kamakwie, he said.

He also said he developed malaria after he was bitten by mosquitoes during his detention and had to take medication.