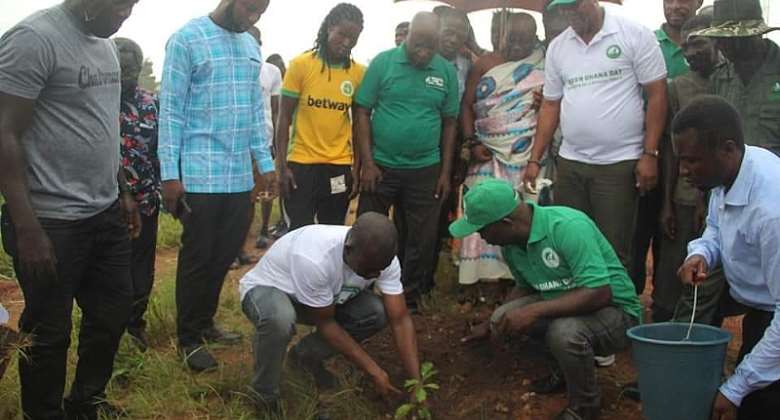 Speaking to the Ghanaian Observer Newspaper after participating in last Friday's national exercise at Sokoban, where the KMA had its version, Hon Pyne noted that the Assembly would back the project to ensure trees planted are consciously watered and monitored to grow to serve its purpose.

The Mayor disclosed that the Assembly was planting 2million tree seedlings from species provided them by the Forestry Research Institute of Ghana (FORIG).

"This is an improvement over the 1million trees the KMA planted in the initial and first national exercise undertaken over a month ago and we are committed to ensuring that the trees we are planting today which is fully supported by Chiefs and people of Kumasi grow to serve the purpose it has been designed", The Mayor stated.

The Mayor served notice that the KMA was vigorously pursuing an agenda to stop the putting up of illegal structures across waterways in the Metropolis.

He said the repercussions of this bad practice was having a toll on other areas in the country especially Accra and some parts of the Ashanti Region.

The KMA, Hon Pyne intimated stands committed to the call by the President of the Republic that illegal structures should be pulled down to allow easy passage of water so as to avoid flood situations when it rained.

"As Mayor, I stand with my Assembly members to ensure that all illegal structures blocking water ways are removed and in so doing i know we can halt the preventable flooding situations that occur when there is heavy downpour", Hon Pyne stated firmly.

Earlier Friday morning, Hon Pyne joined the Asantehene, Otumfuo Osei Tutu II at the Royal Golf Park where the King planted a tree to signify his support for the Green Ghana Project.

Flanked by the Regional Minister, Hon Simon Osei-Mensah and the Mayor of Kumasi, Otumfuo in a symbolic manner watered the tree he had planted and urged the public to take the National exercise serious.

Hottest Photo Reports
Catch up with all the political quotes from our politicians.
Advertise here
More from Regional News
ModernGhana Links
You will not be late if you walk according to his time and season —
U/E/R: Maltaaba Peasant Women Farmers’ Cooperative plant tree species
U/E/R: Maltaaba Peasant Women Farmers’ Cooperative trained in bushfire management
TOP STORIES