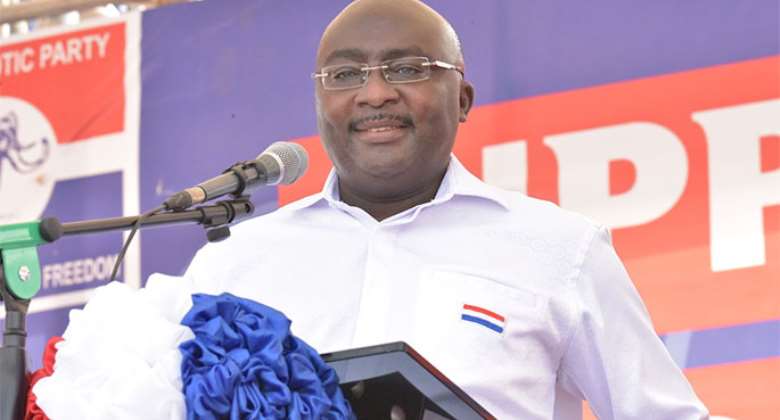 “Dr. Mahamudu Bawumia is younger than the rest; truthfully, he is not a true blood NPP member; he is an outsider…. I want Bawumia to step aside because of the rancour between him and Alan's camp.”

Those are the words of none other than a man who has a doctorate in Political Science and has been teaching same for years now. He is a man who undoubtedly knows all political theories. It is obvious why such a Political Science guru will be making such a ludicrous proposal: either he has been blinded by his hatred for Bawumia, or motivated by what he tends to gain should Hon. Alan Kyeremanten, his preferred candidate, become the flagbearer of the Great Elephant Family.

Dr. Amoako Baah is the man I refer to. I called his proposal ludicrous because seniority in the party is not a criteria for becoming a flagbearer. And even if it were, Dr. Baah’s choice would not come close to being the one to be chosen. The likes of Dr. Kofi Konadu Apraku, Hon. Osafo Maafo and Paapa Owusu-Ankomah would be more deserving of the flagbearership position if seniority were a criteria.

As for the claim that Dr. Bawumia is an outsider, it is as laughable as it smacks of desperation. Yes, Bawumia is a latter-day apostle of the Great Elephant Fraternity. But his impact in the party and contribution towards its success in the last two elections cannot be denied by anyone, not even his detractors. Without a doubt, Dr. Bawumia is the man to beat in the Elephant’s internal elections.

Is it any wonder that others in the Alan camp have joined in singing Dr. Baah’s chorus? You remember the medical doctor who got a solitary vote in the 2007 Osono flagbearership contest and later wrote a damning book about the Great Elephant being chased into the bush, don’t you? Yes, Dr. Kobina Arthur Kennedy, aka Arthur K, I mean. Arthur K is the latest to sing the “Bawumia is a latter-day apostle” chorus.

Listen to the so-called principled politician, “Bawumia has paid his dues to NPP but he should respect those who started before him…. Dr. Bawumia must make way for those who were in the party before he joined to contest for the flagbearer position of the NPP ahead of the 2024 elections.”

If despite the clear writing on the wall Arthur K still contested and received a solitary vote from 1900+ delegates in 2007, then he should allow Dr. Bawumia to also contest and see his ‘smoothness level’. Why should he be worried for Dr. Bawumia?

I have a very good suggestion for Arthur K. Since he is a Methuselah in the party, and Dr Bawumia is a stranger, why does he not contest against Bawumia and test his own popularity in the party? I doubt if he would even get a single vote this time.

I’ve said this before and would repeat it here: The likes of Dr. Baah and Arthur K will add nothing to the Alan campaign. Indeed, no true ‘Kukrudite’ will vote for a flagbearer who has a party traitor and a political comedian in his corner.

They refer to their Vice President as an outsider to the very party he helped to come to power. They call him an alien because of the ‘nokofio’ they will get from his main opponent.

I’m sorry to inform them that their nightmares have just begun because ‘the alien’ will contest the Osono primaries and give their candidate a merciless beating, ‘In shaa Allah’. Yes, Dr. Bawumia is coming like ‘kakai’.

They can delude themselves and continue dreaming. After all, dreaming is allowed, isn’t it?