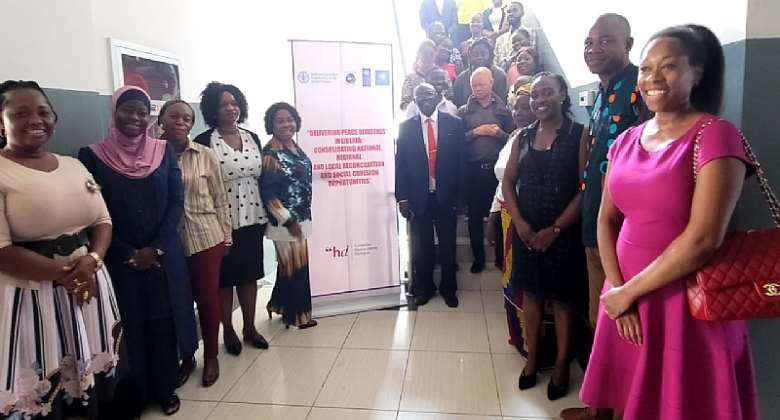 (Monrovia, Liberia - Sunday, June 12, 2022) The Centre for Humanitarian Dialogue (HD Centre) with Headquarters based in Geneva, Switzerland, and regional offices in Africa and Asia is a private diplomacy organisation that assists in mediation between conflicting parties to prevent or end armed conflicts. The Centre also conducts research and analysis on mediation and peacemaking in support of its operational work to improve international efforts to secure and sustain peace.

HD Centre Country Representative to Liberia Madam Elaebi Monique Bowman-Ere said the Peace Dividends in Liberia project when implemented will bridge the local and national reconciliation efforts by ensuring that communities’ voices guide the policy level progress. She stated that the day long workshop brought together civil society organizations engaged in social cohesion and reconciliation initiatives and discussions were held around their progress thus far and capacity needs.

three (3) thematic areas the project is angled on: Support local dialogues for coexistence and conflict resolution; Bridging local and national reconciliation efforts: by enhancing the capacity of local CSOs, ensuring their ability to effectively advocate for their communities and capacity building to ensure CSOs confidence in them to enhance their demand for accountability, stronger local conflict resolution skills to foster unity, and increased collaboration

Delivering a special remark, H.E. Ambassador Babatunde Ajisomo, HD Centre lead facilitator of the project, extended greetings on behalf of HD Centre Executive Director David Harland who he referred to as the inspiration for the project. The Ambassador also extended greetings on behalf of HD Centre Regional Director for Africa Dr. Babatunde Afolabi. According to Amb Ajisomo, Dr. Afolabi's love for Liberia is unprecedented - judging from the fact he did his Masters and PhD on Liberia, and his passionate involvement with projects in Liberia.

The Ambassador lauded UNDP for funding the project and clarified that the project had a year delay due to the coronavirus pandemic. He also appreciated the Ministry of Gender, Children and Social Protection for the development of the Anti Sexual and Gender-Based Violence Roadmap, the Revised Action Plan, the Domestic Violence Act and other useful policy documents.

"These are important policy documents legislations which HD Centre want the implementation to be strengthened - the major problem we have is implementation, we have all the policy documents but we are not implementing them either due to lack of funding or lack of political will or proper coordination." Amb Ajisomo averred.

He stated "the focus of HD Centre is to help in coordinating strategies, implementing strategies that will be impactful to the good people of Liberia especially in the Six (6) counties that we have identified even though this is the initial stage but as more resources come in we will definitely expand our scope beyond the six counties."

The lead facilitator informed the participants that earlier on they held a meeting with the High level UN - Peace Building delegation from New York, USA and the delegation focus is on gender equality, women empowerment and women participation in politics.

The Ambassador ended by reminding stakeholders of the significance of having women at decisions making table.

"I urge all of us to be freed, speak freely, say the challenges that you have, say the progress you are making so that we can build on those things and address the challenges." Mr. Mulbah noted.

He highlighted the significant role played by women in restoring Liberia's peace during the civil unrest and that UNDP is excited to support said project that will further consolidate peace and reconciliation in the Republic.

In closing, Madam Alice Johnson Howard - Deputy Minister for Gender expressed delight that HD Centre is implementing such indispensable project especially at the verge of elections. Minister Howard pleaded with participants to not take for granted the peace that we enjoy but rather engage the process with all honesty and passion as consolidating peace is not just beneficiary to International partners but every Liberian.

She pledged her Ministry's unflinching support and cooperation in every implementing stage of the project.

'My Ga, Fante, Ewe and Northern brothers when was the last t...
51 minutes ago