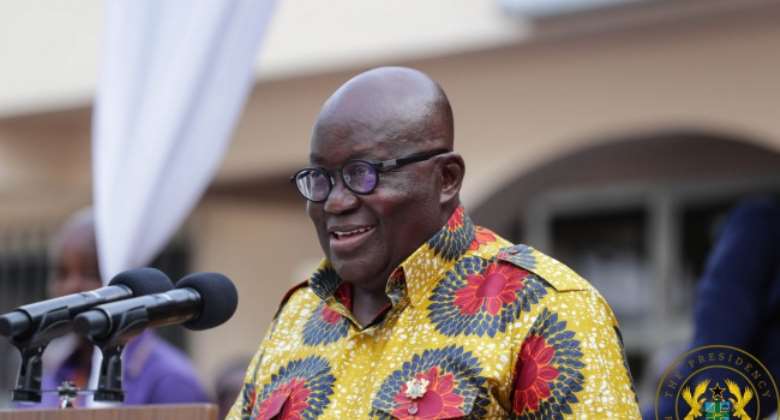 Part of the Heading of this article has been motivated by a famous Republican strategist, Rick Wilson's book title, "Everything Trump Touches Dies".

In that book, Wilson takes the Trump-Pence government to the cleaners. He points out its colossal failure, mismanagement, misplaced priorities, misapplication of federal funds and gross financial malfeasance and tax evasion.

All this put together made the Trump-Pence administration tumbled and wobbled.

Fellow Ghanaians, as what could have been envisaged as the legacy of the Akufo Addo administration keeps disintegrating and gradually turning into a curse, nothing can pain that leadership calamitous picture than the above title: "Anything President Akufo Addo Touches Dies!"

I won't cite any example. Just look through all that public funds have been wasted on. From the construction of a needless National Cathedral many Ghanaians speculate to be a campaign message to deceive God by the President, to the very economic policy majority believe the government cherry-picked without any understanding and appreciation of implications, are the reasons for the current economic mess.

The so-called flagship project keep collapsing in stages due to lack of plans of their sustainability. There’s nothing the Akufo Addo government initiated that hasn’t turned out to be a mere gimmick, a prank, or a curse that keeps hurting the masses.

Consider the free education policy for example. The demerits are simply more than the merits. Why pay over 13000 Ghana cedis the government has borrowed on behalf of Ghanaians in order to educate one or two children? Why sell one’s head in order to buy a cap?

Please space won’t allow me to enumerate the things that die at the president’s hands. He is the poster child of leadership failure with every project of his turned into a Frankenstein monster to the people.

You see, we are suffering today because, apparently, those who thought clay could become gold without any magic or miracle and voted President Akufo Addo and the NPP. Thank God, they have come to realize, in the fullest of time, that it is not just possible to cure cancer with paracetamol!

Corruption can't be fought by armed robbers nor wolves as effective shepherds. That’s why the Office of the Special Prosecutor (OSP) has been more scandalous than corruption under this government it was put up to fight!

Fellow Ghanaians, it was the 16th Ya Na of the Dagbon kingdom in the 17th centuries whose elder Princes of the kingdom mocked him that he should explore the "Kalebule" way he used to usurp the kingdom after the demise of their father, Ya Na Tutugri, to fight the Gonja invaders.

Under the leadership of Prince Kumpatia of the Gonja kingdom, the Gonjas invaded Dagbon for the third time which was left and ignored by the principal Princes of Dagbon due to a dispute over the reign of the kingdom.

During his lifetime, Na Tutugri is reported to have asked his Mallam by the name of Sabali Yarna Yaamusa, which of his (Na Tutugri) many wives would give birth to his successor? The Mallam pointed to a young wife from among the King's wives who was not even pregnant at the time. In the Dabgon culture, it is the eldest son that succeeds the king upon his joining of the ancestors. But in this case, the Mallam pointed to a woman who hadn't even picked seed yet.

After the death of the Ya Na, the eldest princes fought among themselves over the succession. The disputatious matter was taken to Mamprugu's Overlord who is a traditional mediator as the elder brother of the Dagbon people. The King of Mamprugu mediated among the disputing princes by selecting the young Prince Wumbei whose mother was earlier prophesied to be the wife who would give birth to the successor of Ya Na Tutugri. And he was enskined according to the tradition of Dagbon to become the next Ya Na.

The elder princes were bitter and accused their young brother of manipulation of the Overlord of Mamprugu, but they couldn't go against the decision of the King who, till date, traditionally, mediate between dispusting candidates of the paramountcy of Dagbon.

So, when the Gonjas invaded the kingdom, the Princes gang-up against their kid brother the King and refused to help fight the "Russians". Rather, they mocked him that he should use the same hanky-panky he used to manipulate the Mamprugu Overlord to win his support, to fight the invaders!

Whether Na Zangina deserved the cold shoulder by his elder princes or not, president Akufo Addo must be called upon to stop blaming Russia-Ukraine war or Covid-19, and govern.

Fellow Ghanaians, it is clear that what is haunting and hunting the Nana Addo government is the poster boy of the assertion that “the evil men do leaves after them”. And those who live by sword shall perish by sword.

The evil, "kululu" that the Akufo Addo administration as Executive arm of government used to win the election at the polls and at the Supreme court must be used to take Ghanaians and Ghana out of the portage of mess the country is swimming in.

As citizens who were physically and psychologically terrorized by the NPP in order to desperately "win" the 2020 election, it is only appropriate to remind the Akufo Addo government to use the gerrymandering, pork-barrel politics, and the various Machiavellian tactics they employed to "win" the 2020 general elections, to navigate the vessel of the country out of the current economic precipice and hardships Ghanaians are going through.

The painful aspect is that, those who aided and abetted to foist upon Ghanaians this current group of ethnic jingoists, political irredentists, state property thieves and criminals, and social malcontents have long been silent over the maladministration going on now.

Even though many homes can no longer afford Fufuo due to the exacerbated prices of plantain, they are blindfolded into believing the Cock and Bull story that Russia and Ukraine war has to blame.

This brings me to the General Secretary of the National Democratic Congress, NDC's Mr. Aseidu Nkatia's parable of the philosophical envelopes by a Philosopher to an otiose leader like our dear president.

In that parable, General Mosquito narrates that by virtue of having the ability to remote-control an electoral commissioner, a leader of political party was declared winner of an election of a country he has no clue about governance. Just for personal whims he ran for an election!

He then decided to see a political philosopher to help him govern when after hundred days he realized he couldn't man himself out of the labyrinth of governance. The philosopher gave him three envelopes each of which contained an advice for him. The first advised him to blame the erstwhile government, his immediate predecessor. The second advised him to blame the international community and the global economic world order.

This masquerade of leadership used both envelopes yet the tension, suffering, and heat of dissatisfaction due to his fraudulent leadership continues to rage. He quickly turns to the third and last envelope for leadership "Kwick Action" and painkiller. To his surprise the advise contained in the third envelop advises him to prepare his handing over speech.

This is the situation of President Akufo Addo and the now fast becoming Narcissistic Pretenders Party.

Fellow Ghanaians, with the abysmal performance and sheer disappointment by the Akufo Addo administration, the example of the NPP and the term "governance" could be likened to adorning a goat with a golden necklace. It would only take a miracle for the goat to recognize the value of the necklace.

And the example of former president Mahama and Ghanaians who voted against him due to hate and jealousy, is like a gold to the goats. Goats don't know the value of gold. And a man with a bag full of gold is never chased by goats. But let it be leaves of a pumpkin tree, all goats within that community would follow him to his house!

When the NPP came out last few weeks ago to elect their Regional Executives, many Ghanaians were outraged and scoffed at the conduct of participants by the degree of pork-barrel politics that was exhibited.

That regional executive election exposed how shielded and insulated from the current hardship savaging the country the NPP is, due to unrestrained access to proceeds of corruption.

We were witnesses to the cash that was wasted in order for candidates to keep and maintain their grip on political "spoils of war" and indecent lucre. Despite the scorching economic ambience.

Are these people also dwelling in this country as the rest of us?

For many Ghanaians, it is about time psychiatrists of the country are called upon to conduct mental health examination on many of the members of the governing party. What is going on could be due to mental problems on the part of the President.

However, the fact that “anything” the President "touches dies" has led many to believe it is more of a "curse" than issues of either logical mistakes or mental problems.

The President is the problem, let him resign.