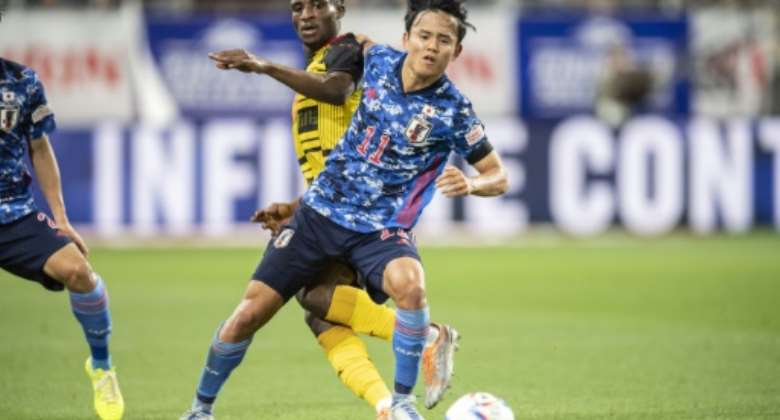 Japan manager Hajime Moriyasu hailed his World Cup-bound team's strength in depth after ringing the changes in a 4-1 thrashing of Ghana on Friday.

Moriyasu made nine changes from the starting line-up that held Brazil scoreless for 77 minutes in Tokyo earlier in the week before finally succumbing to a Neymar penalty in a 1-0 loss.

Japan also beat Paraguay 4-1 at home last week and Moriyasu is pleased with the way his side is shaping up ahead of the November-December showpiece in Qatar.

"We lost our last game against Brazil and we couldn't lose two home games in a row," said the manager.

"The players prepared well and played well despite the team changing a lot. The players were determined to keep the team winning and functioning regardless of who was playing."

Kubo, who spent last season on loan at Mallorca, turned home Kaoru Mitoma's cross midway through the second half to open his account for Japan in his 17th appearance.

The 21-year-old said the goal had been "a long time coming".

"Now people will stop saying I've scored zero and hopefully I'll start banging them in from now on," he said.

Miki Yamane opened the scoring midway through the first half before Crystal Palace striker Jordan Ayew pulled one back for Ghana shortly before the break.

Mitoma restored Japan's lead three minutes later before Kubo and substitute Maeda made the game safe for the home side with second-half goals.

Ghana have been drawn to face South Korea, Uruguay and Portugal in World Cup Group H and manager Otto Addo said the Black Stars will need to improve defensively.

"We had problems with covering the space behind us and covering the pockets in between the lines, but also in duels one against one," he said.

"If you can't stop it, it's going to be difficult."

Japan will play Tunisia in the final of the four-team Kirin Cup tournament on Tuesday after the North Africans beat Chile 2-0 earlier in the day.

"It was good to try out so many players against a team like Ghana, who have qualified for the World Cup," said Moriyasu.

"In terms of the system it was good to try out different combinations, and on top of that we got the win, so the players did really well."