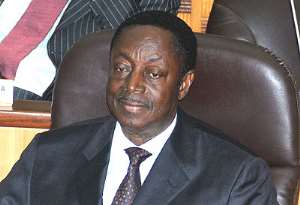 I feel sorry for my fellow Kumawuman citizen, Dr Kwabena Duffour, for unfortunately finding himself in the National Democratic Congress (NDC) political party. Such a decent person without blemish and has the national and collective interests of Ghanaians at heart, is now maliciously being hounded by his fellow NDC guys fronting for former President John Dramani Mahama, the self-styled ubiquitous, but merciless leader of the party.

Dr Kwabena Duffour, as farsighted and eager to mitigate the chronically baneful state-sponsored corruption where Ghana governments are noted for stealing from the public coffers to satisfy their party foot soldiers, decided to come up with a solution. He came up with what he termed as the "Ahoto project", where a privately-sponsored project devoid of dubious government interventions could be found to sponsor party foot soldiers to save Ghana from losing state funds to political party members, supporters and sympathisers.

I have to be honest with Ghanaians that the NDC are more into, and noted for, such malpractices than the NPP. They use that means to sponsor their countless number of serial radio phone-in callers, paid roguish journalists and social media bloggers like Salifu Maase aka Mugabe, Captain Smart of Onua TV and Kevin Ekow Taylor, just to mention a few.

However, the selfish and insatiably greedy lots in the NDC who desire to use politics to acquire immense personal wealth than to seek the collective interests of Ghanaians have ganged up to sabotage Dr Kwabena Duffour who may have privately expressed interest in contesting for the NDC flagbearer position come their D-Day national primaries for that matter.

Having earlier agreed with him on the launching of the said "Ahoto project" at the NDC headquarters on Tuesday, 7 June 2022, Sammy Gyamfi and his ilk of greedy bastards headed by Samuel Ofosu Ampofo, the NDC National Chairman and Minister-in-waiting for John Mahama’s designated ministry of "No Contribution No Chop" (NCNC), at the eleventh hour, most disrespectfully announced to Dr Duffour and his supporters the cancellation of the launching without giving him any prior notice or better explanation.

Without currently interested in going into the nitty gritty of how those within NDC hell-bent on coming to power to fleece Ghanaians to the hilt, I will however want Ghanaians to note that John Dramani Mahama and his factional henchmen do not want anyone to come to distort their aspirations hence sabotaging Dr Duffour.

My direct appeal to Ghanaians is they should be very careful not to fall for the sugar-coated but populist promises amid criticisms of the NPP government and President Nana Akufo-Addo by former President John Dramani Mahama, now the seeming self-appointed NDC flagbearer-cum-presidential candidate.

John Mahama has more known and unknown skeletons in his cupboard than unimaginable. He has no spelt out policies and programmes to advance the country to better the conditions of living of Ghanaians but only criticisms of the ruling NPP government without suggesting alternative solutions.

He blames President Nana Akufo-Addo and his NPP government for the difficult economic situation Ghana is currently going through without letting Ghanaians understand that it is not unique to Ghana but a worldwide phenomenon come about as a result of the devastating and fatal Covid-19 pandemic and the Russia/Ukraine war.

For the information of Ghanaians who desire to know the truth, being discerning but not unreasonable sycophants, please read the following excerpt from page 6 of the International Financial Times newspaper of Friday, 10 June 2022. It states under the heading, “Singapore’s wealthy drive up prices of permits to own a car” that “The real income of households in Singapore has been hit particularly hard by regional events and the rise in commodity prices following Russia’s invasion of Ukraine”

What then is John Mahama talking about; attributing the hike in prices of commodities and petrol in Ghana to the poor management of the Ghana economy by President Akufo-Addo and his NPP government? Is he serious as a person resolutely determined to regain the presidency? And if yes, he is, what then is he coming to do, to seek the sectional interests of those people who will contribute greatly towards his winning of power as is affirmed by his “No Contribution No Chop” (NCNC) promise?

Ghanaians, please don’t fall for the shenanigans by John Dramani Mahama and his bunch of NDC propagandists.

Go for Dr Kwabena Duffour and his good technocratic policies that are able to help Ghana progress than choosing John Dramani Mahama, the clueless, incompetent and populist politician who always aspires to amass illegal wealth at the expense of the suffering Ghanaian masses.

Kwabena, cheer up for all is not lost. Rockson Adofo, the proud and fearless son of Kumawu/Asiampa soil, is solidly behind you to win the NDC flagbearer position same as he is behind Dr Mahamudu Bawumia to win that of NPP.

Hang on, Kennedy Agyapong (Hon) is also one of my favourite candidates for reasons I shall state in my future articles.

I yearn for the development of Ghana to better the collective interests of all and sundry hence appealing to Ghanaians to rally behind, and vote for, credible and visionary persons to become the leaders of Ghana, my motherland.

[Audio] 'Because of Mr Akudugu you want to destroy me, It wo...
36 minutes ago