NPP: A Party That Refuses To Learn From History 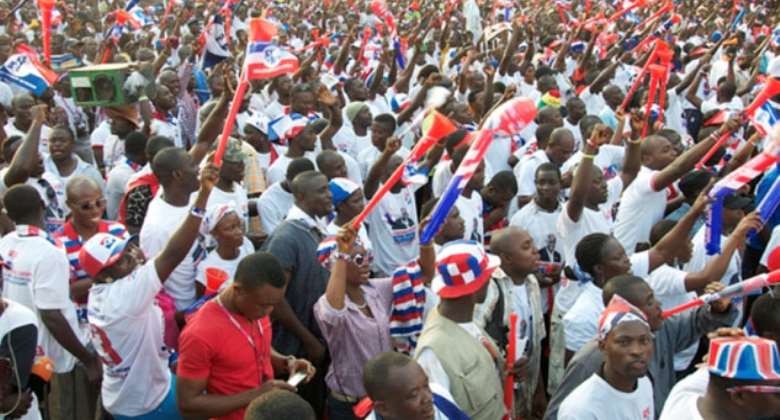 THE GOSPEL truth is that the NPP did not lose the 2008 general election through the ballot box. The party literally handed over power on a silver platter to the NDC through complacency, 'moneycracy' (or is it 'money crazy?), in-fighting, sheer 'swollen headiness', disrespect and crazy lust for internal political power. Call it politically absurd suicide and you will not be far from right.

President Kufuor and his team had taken over from a stultifying and bloody military regime and hopeless quasi military regime that destroyed the economy and everybody thought there was no hope for the new government to turn things around. Inflation had hit the sky and the situation looked so hopeless and bleak that, even the die-in-the-wool supporter of the NPP accepted the fact that things were not going to be easy for the new regime.

The seriousness of the situation in those days was that, apart from the fact that the world price of crude oil was skyrocketing, Ghana had less than two weeks for her oil reserve to dry out. We were heading to the wish-to-be-forgotten revolutionary days of fuel queues at the fuel stations. In no time, Kufuor's government was able to negotiate with the Nigeria government to lift oil to Ghana to save the situation. Public transport had virtually broken down and the country was in trouble as far as public transport was concerned, coupled with high cost of fuel. Within the shortest possible time, Kufuor's administration was able to import thousands of buses into the country to safe the bad situation. That was the Kufuor Buses that you saw in those days. The nearly defunct State Transport Co-operation was revived. The economy started taking shape thanks to the prudent management by the new regime.

As for the exploits of Mr. Kufuor and his regime, as far as the management of the economy is concerned, it is not for me to narrate here. It is too fresh in living memory and Ghanaians are living witnesses to this sterling performance. Success comes with challenges and that of Kufuor's administration was no different. When the tenure of office of Mr. Kufuor was about to come to an end, and the need arose for the NPP to go to congress and elect a flagbearer for the party, the trouble started. Mr. Kufuor's administration performed so well that the party thought if even a monkey from the Boabeng/Fiema Monkey Sanctuary was made the flagbearer of the party for the 2008 Presidential Election, it will win. It was similar to what we are seeing under President Akufo-Addo.

So, seventeen leading members of the party picked nomination forms to contest for the flagbearership position. In those days, every constituency had only ten constituency executive members and five polling station executive members. As flagbearer contestants crisscrossed the country, they doled out huge sums of money and other materials like clothes, mobile phones, hairdryers, motorbikes, outboard motors, etc. to the constituency officers. At the end of the day, Nana Akufo-Addo was made the flagbearer of the party but, the harm had already been done. Those at the grassroots who did not enjoy the booty, became disillusioned, bitter and very angry. Monies which should have been used to contribute to the collective war chest were used to bribe few delegates. That was the more reason why supporters of the party became indifferent and apathetic and refused to go out to vote during the first round which candidate Akufo Addo won but could not cross the fifty plus one percent mark. During the second round of voting, candidate Mills won by a slim margin of less than fifty thousand votes. The die was cast. Power was handed over to the NDC like the way a mother hands over boiled and peeled egg to her son.

After the self-defeat, the party organised a national delegates' conference at the Trade Fair Center in Accra to brainstorm on the need to expand the electoral college in particular, among other issues. It was unanimously decided that the electoral college should be expanded and so it was done. The main aim of this decision was to 'kill' the idea of 'moneycracy. It worked well for the party in 2012 and 2016.

But if extra care is not taken, the history of the 2008 primaries will repeat itself today. In fact, it has already manifested itself during the regional executive elections recently. 'Moneycracy,' the Achilles' heels of the NPP, has reared its ugly head again and re-christened: “highest bidder”, coming in the form of auction. Huge amounts of money were paid by aspiring constituency chairmen in particular to delegates which muddied the waters. Losing candidates became peeved and that is dangerous for the party. There is the need for immediate reconciliation process to take place before things go bad. And who can do this but Nana Addo Dankwa Akufo-Addo?. Nana should do this to add to his uncountable legacies which I will write about later. He must invite those who won and those who lost to a “family meeting” and impress upon them to put the election behind them and work together for the dream of 'Breaking the 8' agenda to become a reality. And Nana should remember reconciliation is like a galloping horse. If it stops by your door, you must immediately jump on it or it will gallop away. This reconciliation should be done before the national executive election. The current national executive officers have no moral right to embark on this assignment because some of them had their hands tainted in this mess.

In the normal circumstances, ex-President John Kufuor should have been the one to call everybody to order but having served the party throughout his salad years and now in his glorious ripe age and having worked past exhaustion and beyond human endurance, to bring the party this far, we must give him the peace of mind to write his memoir which I surely know he is working on. This is a book I want to read and bequeath to my grandchildren before I die and I believe you too want to do so. Abusuapanin must be given time to rest and concentrate. Who knows, bigger issues may crop up when we will need him badly. He is undoubtedly a fountain of wisdom where all Ghanaians can drink from, irrespective of one's political affiliation. To some of us, he is the only one whose face brings tears into our eyes at times like this because he is the only former leader of the UP tradition alive and kicking today. He is like uncooked egg which must be handled well. Our actions and inactions should not break his kind heart because he has lived a life of service to mother Ghana and mankind for that matter. We remember him and cry everyday for missing his compassion and love for mother Ghana but as the sages say, only the person who cries in the rain knows where his tears are coming from. That is why you don't see tears running down our cheeks anytime we remember the good old days of Mr. Kufuor. The Akans say even when one is crying, he still has time to stop and sneeze.