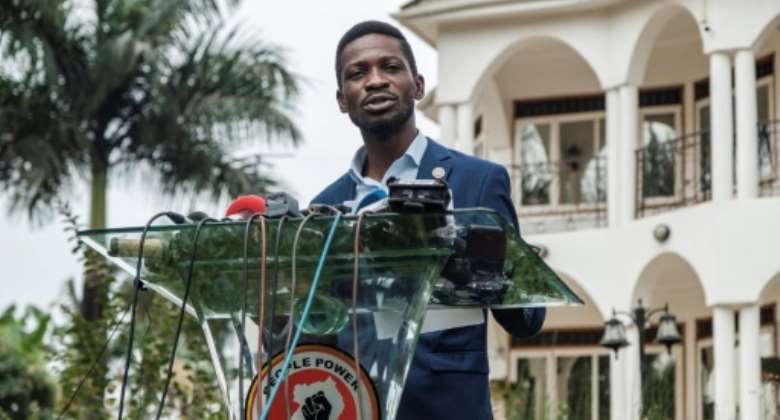 Main opposition leader Bobi Wine attacked the government for failing to 'prioritise the suffering of Ugandans'. By Sumy SADRUNI (AFP/File)

The country of 45 million people has been hit hard by the pandemic and the war in Ukraine, with food prices soaring in recent weeks as President Yoweri Museveni ignores calls for tax cuts and subsidies, urging citizens to live frugally instead.

The 2.4-billion-shilling ($640,000) purchase of two limousines for the parliament speaker and her deputy has stoked public anger, with the country's main opposition leader, Bobi Wine, attacking the government for failing to "prioritise the suffering of Ugandans".

"How do we spend 2.4 billion to purchase two vehicles for the speaker and the deputy speaker to attend ceremonies when millions of Ugandans sleep hungry, when the people cannot afford the basics of life," the rapper-turned-politician told AFP.

Museveni opponent and former presidential candidate Kizza Besigye, who has been charged with inciting violence after he urged Ugandans to protest against the price rise, called the purchase "scandalous".

"It is clear this is a parasitic government and it has to be stopped," he told AFP.

But Uganda's parliament commissioner, Prossy Akampurira Mbabazi, on Tuesday defended the decision to buy the cars, telling AFP: "The public anger is misplaced."

"The cars which the speaker and the deputy were using were 10 years old and had to be replaced," she said.

In his annual state of the nation address on Tuesday, Museveni said that "cutting taxes and subsidies, especially on imports, is suicidal because our people may buy carelessly and we end up draining our forex (foreign exchange) reserves."

Julius Mukunda, the executive director of Civil Society Budget Advocacy Group, an umbrella body of civil society organisations, told AFP "the purchase was in bad taste and in contrast to the president's call to people to be frugal."