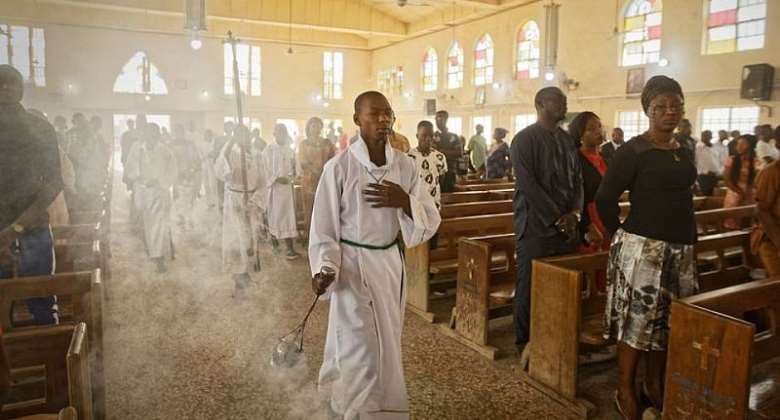 Gunmen storm a church in the Nigerian city of Owo during Sunday's Pentecost service. The governor speaks of a "heinous" attack - who is behind it is still unclear.

Dozens of people were killed in an attack on a Catholic Church in southwestern Nigeria on Pentecost Sunday. According to the Ondo-State government, the attack happened in the town of Owo during Sunday services at St. Francis Church.

A group of unknown gunmen stormed the church and fired indiscriminately at those attending the service, a local resident told a German press agency. According to media reports, explosives were also detonated in the attack.

The exact number of victims is unclear so far. The Ondo-State government did not provide details on the number of dead. The online publication People's Gazette quoted a state legislator as saying 28 people were killed. Some local media, such as the Nigerian Tribune, spoke of about 50 dead.

Ondo-State Governor Rotimi Akeredolu described the attack as "heinous and satanic," adding that, it is a calculated attack on the peace-loving people of Owo.

A video recording purporting to show the scene has been circulating on social media. On it, apparently dead people can be seen lying on the ground covered in blood - including children.

So far, no group has claimed responsibility for the attack. Local residents suspect that the attack was carried out by extremists from northern Nigeria.

Jihadist groups have carried out many attacks on churches in Nigeria's predominantly Muslim north in recent years. This is the first time an attack has been carried out on a church in the predominantly Christian south. Religious conflicts, especially between Muslims and Christians, are a recurring occurrence in the West African country with a population of around 206 million.