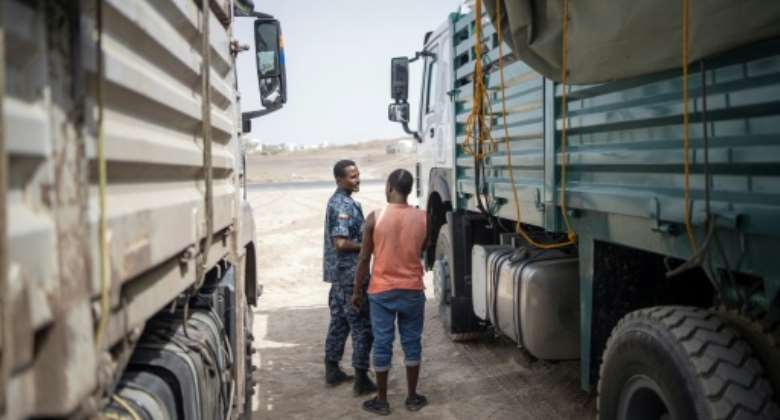 The Tigray region has long been under what the UN has described as a de facto blockade. By Michele Spatari (AFP/File)

Ethiopia called for tighter controls on aid shipments to the country's war-stricken Tigray region as it accused aid agencies of delivering banned equipment that could be used by rebels and more fuel than is currently allowed.

After a three-month hiatus, the government in April authorised the delivery of desperately needed aid by land to Tigray, which has long been under what the United Nations has described as a de facto blockade.

"Special attention should be given to prevent equipment from being transferred to the TPLF," Ethiopian Deputy Prime Minister Demeke Mekonen said Saturday, referring to the Tigray's ruling party, Tigray People's Liberation Front (TPLF).

"I have noticed there are efforts to transport more fuel than allowed and some banned equipment that can be used to carry out the terror group's aims," he said.

Demeke, who was speaking during a visit to the northwestern Afar region where the aid convoys depart to neighbouring Tigray, did not specify what kind of equipment was involved.

"Efforts by the customs commission and other entities to ensure control and surveillance of banned equipment should be boosted," he added.

The UN's humanitarian agency OCHA said last week that while fuel for humanitarian operations had been allowed into Tigray over the past two months, the volume was insufficient and reserves were at low levels.

"Nutrition partners, for instance, need about 24,000 liters of fuel to dispatch available nutrition supplies, including lifesaving therapeutic milk and ready to use therapeutic and supplementary foods, to about 240 health facilities across the region," it said in its latest update published on Friday.

The war erupted in early November 2020 when Prime Minister Abiy Ahmed deployed troops into Tigray, bringing to a head a long-simmering row with the TPLF.

He said the move came in response to TPLF attacks on federal army camps.

In March, the government declared "an indefinite humanitarian truce effective immediately", which allowed several convoys of humanitarian aid to reach the region for the first time since mid-December.