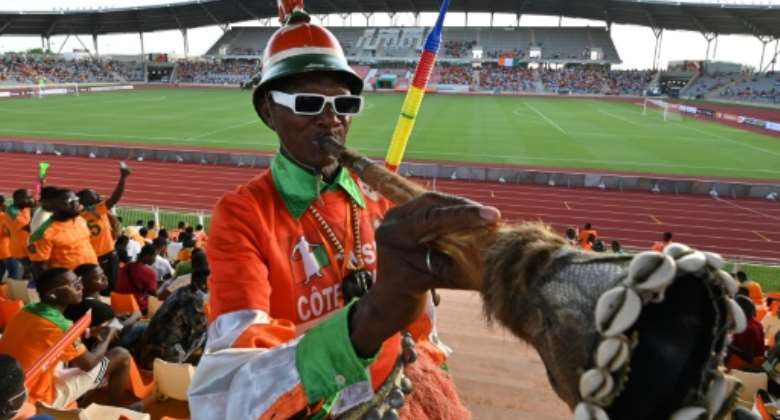 A fan blows a horn before the 2023 Africa Cup of Nations qualifier between the Ivory Coast and Zambia in Yamoussoukro on June 3, 2022.. By Issouf SANOGO (AFP)

French coach Jean-Louis Gasset made a winning debut as boss of the Ivory Coast on Friday when the 2023 Africa Cup of Nations hosts beat Zambia 3-1 in a Group H opener in Yamoussoukro.

The first two goals came after corners with captain Serge Aurier poking the Elephants ahead on 67 minutes and Christian Kouame doubling the lead with his head nine minutes later.

Playing under Croatian coach Aljosa Asanovic for the first time, Zambia fell behind after their best spell of the match as they seek to end a humiliating run of three failed qualification campaigns.

Gasset, 68, who has no previous coaching experience in Africa, succeeded compatriot Patrice Beaumelle, who was dumped after failing to qualify for the 2022 World Cup and making a last-16 exit from the 2021 Cup of Nations.

Although automatic qualifiers as hosts, the Ivorians are playing in the elimination competition to gain match practice rather than rely on often meaningless friendlies.

Comoros won the hearts of Africans at the Cup of Nations this year by restricting hosts Cameroon to a 2-1 win despite fielding an outfield player in goal because their three goalkeepers were unavailable.

The tiny island nation in the south east of the continent began a campaign to qualify for a second successive time with a routine 2-0 home win over Lesotho in Moroni in the other Group H match.

Youssouf M'Changama scored on 59 minutes and Benjaloud Youssouf put the match beyond the reach of Lesotho with a second goal nine minutes from time.

As in Yamoussoukro, both teams had new coaches with France-born Younes Zerdouk in charge of the Comoros and Serb Veselin Jelusic handling Lesotho.

Zambia play the Comoros in Lusaka on June 7 in a match likely to have a major bearing on which nation accompanies the Ivory Coast to the finals next June and July.

In Group B, Siboniso Ngwenya laid an early claim for best goal of the qualifying competition with a stunning added-time equaliser as Eswatini came from behind twice to draw 2-2 with Togo in Lome.

Having fallen behind a second time with just three minutes of regular time remaining, the southern African nation seemed destined to make a losing group debut.

But when the ball was pushed back to Ngwenya, lurking just outside the box, he unleashed an unstoppable shot that flew into the net off the underside of the crossbar.

It was a dramatic end to a match that came alive in the closing stages after Euloge Fessou gave Togo a 20th-minute lead by scoring direct from a free-kick with goalkeeper Mathabela Sandanezwe partly to blame.

Despite the dominance of Togo, Eswatini levelled when Sabelo Ndzinisa nodded in a cross on 85 minutes only for Kodjo Fo-Doh Laba to also score with his head and put the hosts ahead again.

Then came the Ngwenya thunderbolt, which thrilled the visitors and left Togo disappointed as this was theoretically the easiest of their six fixtures.

Burkina Faso climbed above Eswatini and Togo into first place with a goals from substitute Hassane Bande and Dango Ouattara producing a 2-0 win over Cape Verde in the Moroccan city of Marrakech.