Is Oliver Barker-Vormawor Getting Mad with Nonsense? 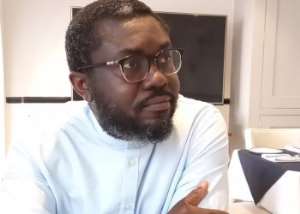 I have been saddened and disappointed by the events of the last three days in Ghana. First, it was the IGP’s letter to the British High Commissioner that became public on Monday. That has been followed by an insane, bizarre and irrational demand by the Convenors of the #FixTheCountry Movement to demonstrate and be policed by armed private security as well as be allowed into Ghana Broadcasting House to broadcast to the nation. When I read the police statement on our Perscoba Senior Citizens’ Political Forum, I assumed it was a joke. It made me ask myself if the authors were under the influence of some substance. This brief article is a discussion of the now cancelled and potential treasonable act that the Convenors of the #FixTheCountry Moment were instigating.

I first heard of Oliver Barker-Vormawor (Oliver) on radio following the Kaka murder and as Convenor of the #FixTheCountry Movement and was impressed by him. For this reason, I googled him and what came up on his Cambridge University profile was exemplary and on seeing his picture, I realised that I might have met him at one of Cambridge University Ghanaian Society’s events. His CV was impeccable. He did not disappoint when he appeared on Newsfile and subsequently made contact with him by emailed.

Then followed his now infamous Facebook post about stagging or organising a coup if the E-Levey bill was passed, which led to his arrest, detention and charges in early February 2022 till he was bailed in third week of March 2022. Though I am against future coups in Ghana for whatever reasons in whatever circumstances, I wrote an article expressing concerns over his treatment and abuse of his rights by the state (see, “Is Oliver Barker-Vormawor Being Persecuted or Prosecuted”, Modernghana, March 2022) Since then, some of his actions and omissions have given me concerns to question his motives. First, he was alleged to have repeated the very Facebook post that landed him in trouble and despite the fact that, he was warned about coups by the judge who granted him bail. He has been arrested for motor traffic offence and was recently reported to have blamed Akans for Agyapa. These and other public utterances are suggestive of someone who is either recalcitrant, rebellious or deliberately seeking a fight with the state. It also dawned on me that either he is careless, clever but not intelligent, a spoilt child; simply, an attention seeker or someone who wants to be martyred.

The last straw for me, was the letter allegedly written by him to the police for permission to be granted a licence for anarchy on the streets of Ghana on June 4, 2022. I assumed that as a consummate lawyer, he ought to and must have known that what he demanded were tantamount to taking the country to ransom. Which country in the world is such stupidity allowed? Even in the US where people are allowed to bear arms, no one in his or her right mind would suggest what he was seeking to do in Ghana. Oliver, for your information, Ghana may have weaknesses in her leadership and governance architecture, but she is a functioning state and not a failed state. What you demanded is what happens in failed states such as Libya, Eritrea, Iraq and others.

Armed private security on the streets of Accra or Ghana to police demonstration because he does not trust Ghana Police Service to protect them. In effect, that is a private army, one of the criteria for failed states. It might be worth asking Oliver to share with the police who are members or employees of the private security who will bear arms to protect them, how many are they, where would they get the arms and where do they keep them? Is the armed-bearing private security registered in Ghana? These are matters of national security that the state ought to be asking him for answers. He claims that was just to shock, surprise or expose police brutalities. Well, for someone who had claimed in the past to wanting to organise a coup, even if he does not have the capacity to do so, making these demands would ring alarm bells in the ears of any proactive security agency.

Let me make it clear that, I am not against protest by citizens because it is a fundamental right, but it does not include arms but rather peaceful protest. What Oliver was seeking to do was anything but peaceful. I also do not disregard police brutalities and abuse by officers of Ghana Police Service. However, the solution does not lie in armed-bearing private security to take the role of Ghana Police Service but either using the civil courts to sue the police or the supervisory ministry to retrain police officers on how to better police citizens to respect and protect their human dignity.

Is Oliver aware that broadcasting to a nation across the world through the national radio or television or both is only limited to heads of states, presidents, prime ministers and selected ministers on special occasions? Therefore, in what capacity was he seeking to speak to the people? It appears he has not learnt any lessons from his experience because seeking to be allowed into GBC to speak to the nation is similar to announcing a coup on air because no one knows what he is capable of saying given the opportunity he was demanding. Who the hell does he think he is?

Oliver-Barker-Vormawor is either deluded to think that he could do whatever he wishes in Ghana, naïve or misguided. I have noticed that he has assumed the title, Osagyefo. Is he really a saviour? He does not deserve to bear such an important appellation reserve exclusively for eminent Ghanaians. The real Osagyefo was betrayed by military coup. Therefore, anyone seeking to bear this accolade should have nothing to do with coups, yet, Oliver wants to do a coup. What an irony?

It was disappointing to read that Oliver had been arrested and charged for a traffic offence for a number of reasons. For example, he has become a role model for the youth and brand ambassador for #FixTheCountry. Again, as someone under a bail, among others, he is required to be of good behaviour and any breach of the law could lead to his recall into custody. Last but not the least, he should have known that the state would keep a watchful eye over him, therefore he ought to have been careful with his every step.

Again, for him to blame Akans for the government’s decision to bring back the Agyapa Agreement because gold is in Akan areas is very unfortunate. This is either borne out of his lack of understanding of geopolitical nation state in general or that of Ghana. Ghana as a sovereign state is one totality, unitary and indivisible. Gold in any part of Ghana belongs to the whole of Ghana and all Ghanaians and therefore the security and protection of the natural resources is a collective responsibility but not only for those where the resource is found. His irresponsible and accusatory statement is divisive and against nation building and national development.

I believe Oliver has become swollen-headed and lost sight of what his objectives. He must come down from his pedestal, humble himself before it’s too late. His demands were aberrations, affront to rule of law and insult to Ghanaians. Though he has apologised, his apology should be treated with contempt that it deserves. Unless in the next few months, he can demonstrate that he is not self-seeking, self-centred attention grabber, no one should take him seriously. His action has caused irreparable damage not only to himself but also the brand #FixTheCounrty. He has lost a great opportunity to make a difference. Moreover, he has shown that he is no different from any Ghanaian politician and those of us who initially admired what he began have all been let down.

My unwanted and unsolicited advice to him is, to arrange to return to Cambridge University as soon as practicable to complete his studies, avoid publicity and further blunders that would alienate the public and erode trust in him because this monumental error of judgement is a stain on his character that would take time to recover. As a PhD student, he could remain in Ghana and continue with his academic studies. Until he proves to Ghanaians that he is serious, he would be treated with contempt that he sought to treat Ghana and Ghanaians.

[Audio] 'Because of Mr Akudugu you want to destroy me, It wo...
12 minutes ago