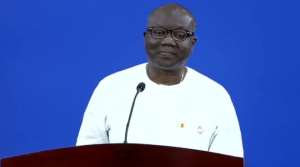 The Ministry for Finance has been cited as an institution where financial recklessness is very high.

This was contained in the 2020 IMANI Fiscal Recklessness Index launched in Accra on Tuesday, May 31, 2022.

Ghana over the years has enacted various laws and regulations to improve public finances and service delivery.

Despite laws and regulations on accounting and auditing standards, political economy issues continue to hamper the effective implementation of Public Financial Management (PFM) systems, resulting in the regular occurrence of financial irregularities.

This includes the over politicisation of government function and the lack of independence of state institutions coupled with weak corporate governance in the public sector.

In the revealing Fiscal Recklessness score (FRS) of the IMANI Centre for Policy and Education report put together with support from Oxfam Ghana, the Ministry of Health, Roads and Highways, Employment, and Foreign Affairs Ministry joined Finance Ministry in the top five.

Speaking to journalists after presenting the findings of the report, Research Consultant Mr. Dennis Asare stressed that the irregularities uncovered in Ministries, Departments and Agencies of government are very worrying.

Disclosing that over GHS9.2 billion in tax irregularity was recorded in the last six years, the IMANI Research Consultant noted that there is a need to tighten internal controls.

The Research Consultant continued, “If we are able to tighten the internal controls and Public Financial Management measures in the country we will be able to address the cause of the recklessness which are mainly driven by lack of compliance, weak internal audit control system, and lack of application of sanctions.”

On his part, an Economist and Professor of Finance at the University of Ghana (UG), Prof. Godfred Bokpin said he is not surprised the Finance Ministry is topping the Fiscal Irregularities Index.

“I think it's very sad. I'm saying it's very sad because in the face of suffering where we are being told to tighten belts, at a time where Covid has impacted individuals, households, businesses, and the government is forcing E-Levy down our throat we have had to accommodate recklessness like this. It's contradictory and it doesn't send a good signal to stakeholders, taxpayers, the citizens, to the international community,” Prof. Godfred Bokpin said.

He proposed, “I think we should be looking at tightening many of these leakages because that is the only way we can progress. At this rate of recklessness, then generating more money is not the solution.”

In a recommendation, IMANI wants the Auditor-General to rigorously apply the disallowance and surcharge powers given to it under Article 187 (7) (b) of the 1992 Constitution.

It also wants the Attorney General to further enforce punitive measures against persons or individuals found to have committed irregularities.

IMANI further recommends that the Public Accounts Committee be strengthened to address the lag in accountability.

In his closing remarks, Franklin Cudjoe who is the Founder and President of IMANI expressed his gratitude to Oxfam for its support.

He disclosed that his outfit will follow commentary on the report and work to bring out another one in due time.

“We are grateful to Oxfam for this report. We hope that we will be able to do another report next year. Let’s continue to engage,” Franklin Cudjoe remarked.