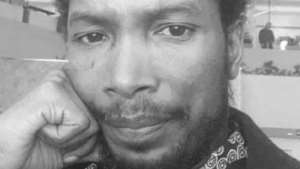 Sierra Leone authorities must cease their harassment of the Africanist Press news site and its publisher, Chernoh Alpha Bah, and should investigate the death threats against him, the Committee to Protect Journalists said Tuesday.

On May 4, Sierra Leone’s Office of National Security (ONS), a federal security agency, submitted a complaint to the Independent Media Commission, the country’s media regulator, according to a copy of the complaint published by the Africanist Press and Bah, who spoke by phone with CPJ.

The complaint accused the Africanist Press of making “a deliberate attempt…to stir disaffection in the military,” which the ONS said could “cause unrest in the country.” The agency asked the commission to warn the news organization against “inciting publications.”

The Africanist Press is a U.S.-based news site that covers Sierra Leonean politics and “grassroots African perspectives” on current events, according to its website.

The ONS letter followed a May 3 Africanist Press report, published on Bah’s Facebook page, which has more than 14,000 followers, alleging that the salaries of 30 officials in Sierra Leone’s finance ministry could cover the monthly earnings of 1,747 Sierra Leonean soldiers, Bah told CPJ.

“Sierra Leonean authorities should cease their harassment of the Africanist Press and must investigate the death threats against its publisher, Chernoh Alpha Bah, instead of trying to censor him,” said Angela Quintal, CPJ’s Africa program coordinator, from New York. “Allegations of treason and claims that journalism threatens national peace are dangerous tools too often wielded by authorities against the press and can have a chilling effect on press freedom.”

The U.S.-based Bah has also been the target of death threats and other threats sent via social media. On May 6, Bah received a death threat in a Facebook direct message from a user who accused him of trying to “distract the real citizens of Sierra Leone,” according to Bah and a screenshot of the message reviewed by CPJ.

On May 23, a Facebook group called the General Kalokoh Media Team posted that the Africanist Press should face prosecution for cybercrimes, accusing Bah of exposing “highly classified” data. The group, which as of late May had more than 700 members, states its purpose as “promoting the interest of the president,” an apparent reference to President Julius Maada Bio.

When CPJ called a number listed on the General Kalokoh Media Team’s Facebook account, a person who claimed he could speak anonymously for the Facebook group said they have contacted local and international authorities about the Africanist Press posts, which he said are inciting soldiers against the government. “We will not entertain any sort of negotiations. We must track him down,” the person said, referring to Bah.

On May 24, Sorie Fofana, a member of the ruling Sierra Leone People’s Party and chairman of the government-owned Sierra Leone Cable network’s board of directors, wrote in an opinion piece on the news site he publishes that authorities should treat Africanist Press reports as treason and said the news organization was run by “dissident elements.”

When contacted by CPJ via phone, Fofana said he made the allegations because he views the Africanist Press reports as an incitement of the army, which he described as “unacceptable.”

Bah said his news site has continued publishing reports on alleged corruption under the Bio administration, but added that the growing threats against the Africanist Press could lead to the news site being suspended and to his own extradition from the United States for prosecution in Sierra Leone.

Previously, on March 2, the privately owned news site, AYV Newspaper published a report quoting senior government officials as saying that the Bio administration was planning to sue the Africanist Press for defamation and publishing “unverified data” while reporting on alleged corruption among government officials and First Lady Fatima Jabbe Bio.

Bah told CPJ that he believed, based on conversations with confidential sources, that the threatened lawsuit was related to a January 25 Africanist Press report alleging that the first lady had spent 7.89 billion leones ($US615,000) of public funds on personal shopping. As of May 24, the Africanist Press had not received any communications about the lawsuit, said Bah.

Sierra Leone’s Minister of Information and Communications, Mohamed Rahman Swaray, told CPJ by phone that he would reply to written concerns about the threats of violence and prosecution. CPJ sent him questions via messaging app, but has not received a response.

CPJ’s calls and text messages on May 24 to Abdulai Caulker, the national security coordinator at the ONS, and Victor Massaquoi, chairman of the Independent Media Commission, went unanswered.