Germany hands over looted artefacts to Namibia, but on loan 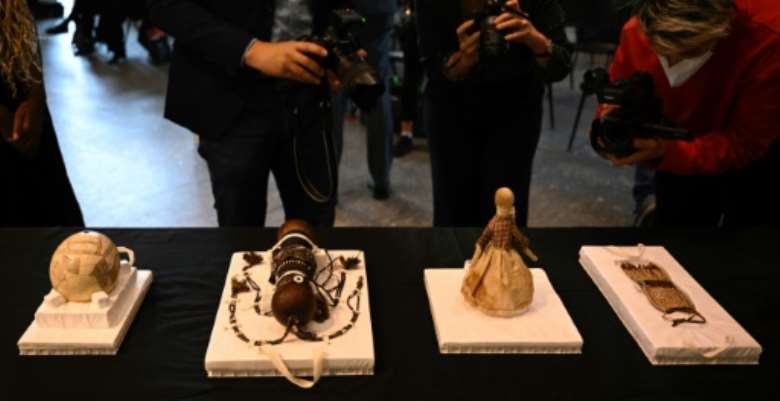 Dome of the artefacts returned to Namibia, pctured when they were put on display in Germany last week. By Tobias SCHWARZ (AFP)

Namibia on Monday took delivery of 23 ancient pieces of jewellery, tools and other objects pillaged during colonial rule, and returned as an indefinite loan from Germany.

The return of the artefacts is part of a project to encourage rapprochement between the two nations.

"All the artefacts were collected during the Germany colonial era from different Namibian communities," said the Museum Association of Namibia chairwoman, Hilma Kautondokwa.

The returned items were taken mostly between the 1860s and the early 1890s, she said. Hundreds of other objects remain in Germany.

The items were handed over to the National Museum of Namibia by the Germany's Ethnological Museum of the Prussian Cultural Heritage Foundation.

They were immediately put up for public exhibition and will be available to local academics for research.

In May last year, Germany acknowledged it had committed genocide in colonial-era Namibia and promised a billion euros in financial support to descendants of the victims.

Activists have rejected the offer as insufficient for the atrocities that have poisoned relations between Namibia and Germany for decades.

The return of the 23 artefacts came after three years of talks between Berlin's Ethnological Museum and the National Museum of Namibia.

Activists in Namibia have also questioned why Germany opted to loan the looted artefacts as opposed to simply handing them back.

The Prussian Cultural Heritage Foundation president, Hermann Parzinger gave a "guarantee... that these objects will stay in Namibia".

The return of the artefacts is the latest move in response to mounting calls in Africa for Western countries to hand back colonial spoils from their museums.

In 2019 Namibia received a Bible and a whip that belonged to celebrated national hero, Kaptein Hendrik Witbooi, who was instrumental in the early fight against German colonial domination.

The previous year, Germany repatriated skulls, bones and human remains that had been shipped to Berlin during the period for "scientific" experiments.