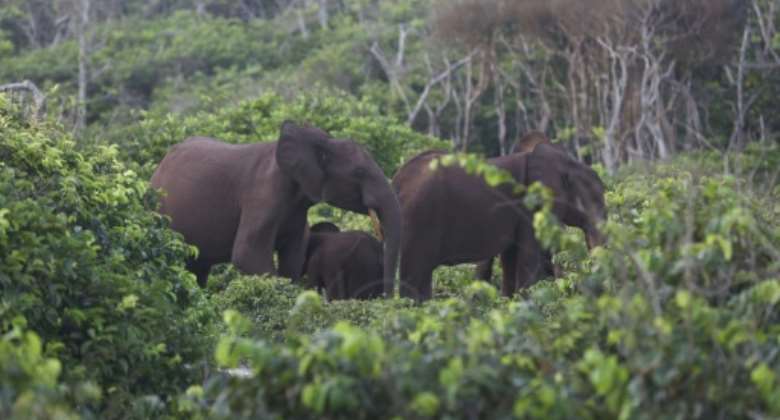 Success story: The number of forest elephants in Gabon has doubled in the past decade. By Steeve JORDAN (AFP)

A whistle blows. The car stops, and the driver is politely asked to turn off the engine and get out.

A team from Gabon's anti-poaching brigade then searches the vehicle from top to bottom, looking in every cranny for guns or game. Nothing is found, and the driver is allowed to move on.

The unit's task is to help guard Gabon's rich biodiversity.

Forests cover 88 percent of the surface of this small central African nation, providing a haven -- and a tourism magnet -- for species ranging from tropical hardwoods and plants to panthers, elephants and chimps.

The team was on patrol close to a small village called Lastourville, 500 kilometres (300 miles) southeast of the capital Libreville.

The area has been badly hit by poaching, and tracks dug into the forest floor by logging vehicles are also used by illegal hunters to enter and shoot game.

Money-spinner: A motorised canoe carrying tourists in Louango National Park, whose lagoon is a treasure trove of elephants, hippos and fish. By Steeve JORDAN (AFP)

"There's no standard profile of a poacher. Everyone poaches -- from the villager who is looking for something to eat to some big guy in the city who has an international network," the brigade's commander, Jerry Ibala Mayombo, told AFP.

The unarmed unit sees its role as "educating, awareness-building and, as a last resort, punishing," he said. The heaviest sentences are for ivory smuggling, which can carry a 10-year jail term.

The two-year-old service was created by a partnership between Gabon's ministry for water and forests, a Belgian NGO called Conservation Justice and a Swiss-Gabonese sustainable forestry firm, Precious Woods CEB.

"At the start, the overall feeling towards us was mistrust. But that's not the case today, because we have got the message across to people about what we do," said Ibala Mayombo.

"We sometimes face violent poachers who threaten us, sometimes with their guns," he said. The team can be given a police escort when necessary.

Gabon, an oil-rich former French colony, is putting itself forward as a major advocate for conservation in central Africa, where wildlife has been battered by wars, habitat destruction and the bushmeat trade.

In 2002, Gabon set up a network of 13 national parks covering 11 percent of its territory.

In 2017, it created 20 marine sanctuaries covering 53,000 square kilometres (20,500 square miles) -- the biggest ocean haven in Africa, and equivalent to more than a quarter of its territorial waters.

These initiatives have helped to place Gabon firmly on the map for lucrative eco-tourism.

But beneath the applause, there is the daily challenge of managing problems when humans and animals collide.

Gabon has a huge success story in its conservation of African forest elephants.

Across Africa, numbers of this species have fallen by 86 percent in 30 years -- the animal is now in the Critically Endangered category on the Red List compiled by the International Union for Conservation of Nature (IUCN).

But in Gabon, the forest elephant population has doubled in a decade to 90,000 animals -- although this has also come at a cost of frequent conflict between animals and farmers.

Conflict: Elephants have ravaged crops planted in a field near the village of Baposso. By Steeve JORDAN (AFP)

In one of the villages, Helene Benga, 67, was in tears over what to do.

"You go into the field in the morning and you see he's eaten a bit (of the crop). You go the following day, and he's eaten another bit. Within a few days, all the crop will be gone. I've got no money and nothing left to eat. What am I going to do?" she asked.

'We hunt to live'

In the village of Bouma, around 30 local people attended a meeting to promote awareness about hunting restrictions -- which species could be hunted and at what dates, areas where hunting was banned, how to obtain a permit, and so on.

The mood was tense.

"What can we do when animals invade our fields?" asked one person. "How can you tell the difference between a protected species and a (non-protected) one when you're hunting at night?" said another.

"I do understand that we have to protect wildlife," said Leon Ndjanganoye, a man in his 50s.

"But here, in the village, what do we do to live? We hunt. The laws are a vexation."