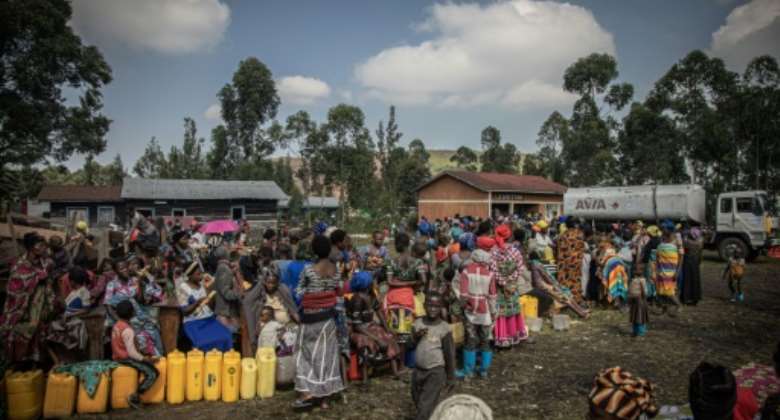 Fighting between M23 rebels and Congolese soldiers has caused many people to flee their homes in the eastern Democratic Republic of Congo. By Aubin Mukoni (AFP)

Fighting between M23 rebels and Congolese soldiers has caused many people to flee their homes in the eastern Democratic Republic of Congo. By Aubin Mukoni (AFP)

Rwanda on Saturday said two of its soldiers were being held captive by rebels in the Democratic Republic of Congo, and accused government authorities there of backing the group responsible.

It comes as a diplomatic feud between the two neighbours escalates, with both sides accusing each other of aiding armed militias in the volatile eastern DRC region that borders Rwanda.

On Saturday, RwandAir announced it was cancelling flights to DRC, after Congolese authorities suspended the carrier and summoned Kigali's ambassador over what it alleges is Rwanda's support for M23 rebels.

Rwanda Defence Force (RDF) later said two soldiers had been kidnapped on patrol and were being held by the Democratic Forces for the Liberation of Rwanda (FDLR), another rebel group active in eastern DRC.

"We call upon authorities of the Democratic Republic of Congo that work closely with these genocidal armed groups to secure the release of the RDF soldiers," the RDF said in a statement.

The two soldiers were named by the RDF as Corporal Nkundabagenzi Elysee and Private Ntwari Gad.

The abduction followed an attack earlier this week along the border by Congolese forces and FDLR rebels, the RDF added.

Kigali had already called for an "urgent investigation" into that incident, which it said involved Congolese forces shelling Rwandan territory and injuring civilians.

Fighting between Congolese forces and M23 erupted on several fronts this week in North Kivu, a conflict-torn eastern province of DRC, which borders Rwanda.

The United Nations said on Friday the fresh clashes had displaced 72,000 people, and warned that those on the run faced constant violence and the looting of their homes.

Kigali has denied involvement, with a government spokeswoman saying Rwanda has no intention of being drawn into an internal matter of its neighbour.

Kinshasa said late Friday it would take "conservative measures" against Rwanda, which included summoning the ambassador and blocking flights from the national carrier.

The airline, RwandAir, responded on Saturday by cancelling "with immediate effect" all flights to Kinshasa, Lubumbashi and Goma.

DRC and Rwanda have had a strained relationship since the mass arrival in the republic of Rwandan Hutus accused of slaughtering Tutsis during the 1994 Rwanda genocide.

Kinshasa has regularly accused Rwanda of carrying out incursions into its territory, and of backing armed groups there.

More than 120 armed groups roam volatile eastern DRC, many of which are a legacy of regional wars more than two decades ago.

Relations had begun to thaw after DRC President Felix Tshisekedi took office in 2019, but the recent resurgence of M23 violence has reignited tensions.

But M23 resumed fighting this year, accusing the Congolese government of failing to respect a 2009 agreement under which its fighters were to be incorporated into the army.