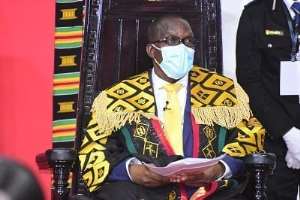 You are either an Honest-to-God civil or public servant of the State who is entrusted with the diligent management and the jealous protection of the fiscal and material resources of the Sovereign People of the Democratic Republic of Ghana, or you are simply a criminal robber-baron and a thug. It is as simple as A-B-C-D! Which is why the Speaker of Ghana’s Parliament, Mr. Alban S K Bagbin, would be much better off not to make matters worse for both himself and those pathologically thievish executive operatives of the John “European Airbus Payola” Dramani Mahama-led National Democratic Congress (NDC) who were found to have criminally and illegally drawn home double salaries by Mr. Daniel Yaw Domelevo, the former Auditor-General, by cavalierly and imperiously attempting to cadge an alibi for these reprobate class of common thieves and thugs (See “ ‘Stop Politically Calling Us ‘Double Salaries’; It’s Caused by Weakness in System’ – Speaker Bagbin” Modernghana.com 5/25/22).

Such presumptuous attempt at a self-righteous apology by the longest-serving National Democratic Congress’ Member of Parliament is nothing short of inexcusably absurd, because it also presupposes that illegally and criminally taking advantage of systems failures to unconscionably enrich oneself is perfectly legitimate and normal. If, indeed, that were the case, why hadn’t Mr. Bagbin promptly confronted Mr. Domelevo at the very moment and time when the extant Auditor-General made those forensically actionable or prosecutable revelations? It is also quite obvious that the retired NDC-MP for the Nadowli-Kaleo Constituency, in the Upper-West Region, would rather not have this Class-One Felony become a salient plank and a major focus of the New Patriotic Party’s electioneering-campaign agenda in the runup to the 2024 General Election.

But, of course, it goes without saying that there is absolutely nothing that the Judgment-Debt-guzzling National Democratic Congress’ megalomaniacal kleptocrats can do about this, short of promptly and thoroughly disavowing any scurrilous attempt to make the Electronic Transactional Levy or E-Levy their major electioneering-campaign plank. But even if they were to solemnly disavow the opportunistic use of the E-Levy Act as a 2024 electioneering-campaign plank or propaganda staple, I sincerely doubt that their political opponents of the New Patriotic Party would consent to ignoring or proscribing the use of the Mahama Posse’s double-salary racket as a 2024 electioneering-campaign staple.

The fact of the matter, and we have repeated this times without number, is that the NDC kleptocrats cannot facilely ride on the crest of public disaffection with the clearly vacuous promise of unilaterally and summarily abrogating the auspicious and progressive E-Levy revenue collection avenue and, to be certain, one that is unarguably a very progressive and civically responsible avenue for the salutary development of the country, as a specious means of bringing genuine relief to the average Ghanaian taxpayer, while in reality wantonly and thievishly engaged in the unconscionable looting and the depletion of the very highly limited fiscal resources that our Central Government direly needs to develop and significantly improve the quality of life or the living standard of the average Ghanaian citizen.

But, in fact, what I really wanted to promptly highlight here, more than anything else, is the fact that in politics virtually and decidedly everything is fair game, especially matters strictly verging on the question of which group of politicians and their political party establishment has the very best and the collective interests of the people at heart more than any of their other most ardent rivals and political opponents. And on the latter count, there can be absolutely no gainsaying the fact that the operatives of the social-intervention oriented New Patriotic Party have absolutely no rivals or viable competitors, definitely not among even the vanguard ranks, let alone the entire constabulary, of the veritable Looting Brigade that is the self-righteous and self-infatuated Rawlings-founded National Democratic Congress.

It is also significant to underscore the fact that, even as Speaker Bagbin poignantly hinted recently, the patently criminal practice of the double-salary scamming of the Ghanaian worker by the executive operatives of the National Democratic Congress actually began on the watch of the late Founding-Father of the latter political establishment as relatively far back as the very inception of Ghana’s Fourth-Republican dispensation, when a strategic error on the part of the leadership of the extant main opposition New Patriotic Party resulted in Ghana’s effectively becoming a one-party democratically elected dictatorship in the four-year period from January 1993 to January 1997. If the preceding observation has validity, then any serious attempt to retrieving the people’s stolen money and to punishing deliberate executive thievery must begin from the aforementioned temporal frame.

If, indeed, there is a weakness in the system, as Speaker Bagbin smugly claimed recently, it is the expressly mandated duty of Parliament and our democratically elected leaders and politicians to correct such systemic weaknesses, not to criminally take advantage of the same to recklessly plunder the limited fiscal resources of the country and to greedily feed fat on the same, while the hardworking but woefully underpaid Ghanaian worker and his/her children and dependents went to bed several times a week hungry or famished. Ultimately, what the preceding argument by Speaker Bagbin tells us, the civically responsible Ghanaian people, is the very disturbing but scarcely surprising fact that, by and large, the leadership of the Property-Looting Social Democrats of the Bagbin and Mahama-led National Democratic Congress cares very little, if at all, about the needs, wishes and aspirations of the Ghanaian electorate and the citizenry at large.