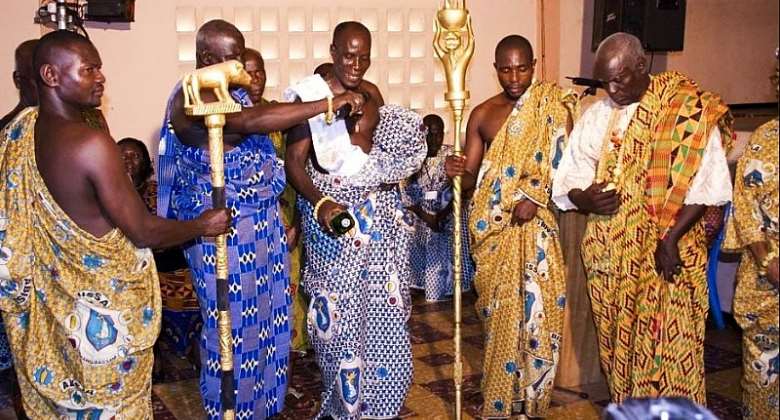 Drink offering or libation has been a spiritual exercise that has been performed by those who know it's spiritual essence before the advent of religion as a mass controlling tool which is supposed to help the people find God.

Drink offering is a form of prayer where an individual pours any liquid (spirits, wines, water, milk etc) to evoke the energies of a God or deity. The type of drink poured or offered during the prayer depends on the type of spiritual entity one is dealing with.

The drink serves as a conduit to link the individual offering the prayer to the spiritual entity and that draws one closer to the spirits than without.

In our local setting, most of our traditional priest, chiefs, linguist often offer varied drinks as offering to spirits depending on what is acceptable to their deity or God they are evoking their energies or praying to. While some pour 'apketeshie' (local strong drink) others pour palm wine, honey, milk, dry gin, 'pitoo' (locally brewed drink) etc.

To ascertain whether what Mr. Mensah is saying makes sense or no, the Bible is the basic book for Christians and that could be used as a reference to crosscheck his views.

In Numbers 28:1 and 8 "The Lord said to Moses" and the verse seven states "The accompanying drink offering is to be a quarter of a hin of fermented drink with each lamb. Pour out the drink offering to the Lord at the sanctuary."

In the view of Frederick Mensah, "The Lord gave Moses instruction to pour libation and even added the quantity of the drink that should be offered to Him."

If that is the case, then, the pouring of libation isn't wrong but a potent spiritual exercise which is more effective than just an audible prayer.

Drink offering (libation) isn't the problem but to what intent and which spirit associated with the drink offering prayer is what makes the difference (Mensah, 2022).

From this view point of The Way Networks Leader, it appears the hidden secrets within the Christian faith that can aid one's progress and development aren't thought. 1Corinthians 2:6-7 spiritual wisdom is a secret and "No one teaches spirituality in church, all that is thought is theology and theology isn't what people need to solve their problems and develop spiritually. Rather theology makes Christians dogmatic and indoctrinated than being spiritual (Mensah, 2022)".

Jacob is an important personality within the Biblical history, he offered a drink offering after his encounter with God and called the place where he poured the libation Bethel (a spot where God is worshiped, marked by a pillar or a holy place).

If Jacob, a Hebrew patriarch who was the grandson of Abraham, the son of Isaac and Rebekah, and the traditional ancestor of the people of Israel, performed drink offering at a place he encountered God and named that very spot a holy place. What is the problem with contemporary Christians and drink offering?

Again, Numbers 29:6 "These are in addition to the monthly and daily burnt offerings with their grain offerings and drink offerings as specified. They are food offerings presented to the Lord, a pleasing aroma."

With the plethora of Bible verses that support drink Offerings to God, how come the Christian faith has blatantly refused to inculcate such spiritual practice and teachings within the church? Is it lack of understanding or there is something about religion that detaches people from their original spiritual source?

One may say we are no more under the law but under grace. This is the greatest misconception and misunderstanding of Apostle Paul’s teachings on grace. In Matthew 5:17-19 Jesus teaches that He came to establish the laws and the prophets and not to destroy them. So where does this doctrine of lawlessness came from. Luke 2:22-23 also confirms that Jesus, the mother Mary and father Joseph also practiced and obeyed the laws of Moses so please we should not pretend we know better than the Messiah and his family.

This write up isn't against the Christian faith but rather to unearth a hidden practice, an aspect missing in the modern day Christian spiritual journey. This is to hence our walk and contact with the Divine Creator through the spiritual Christ that dwell within us.