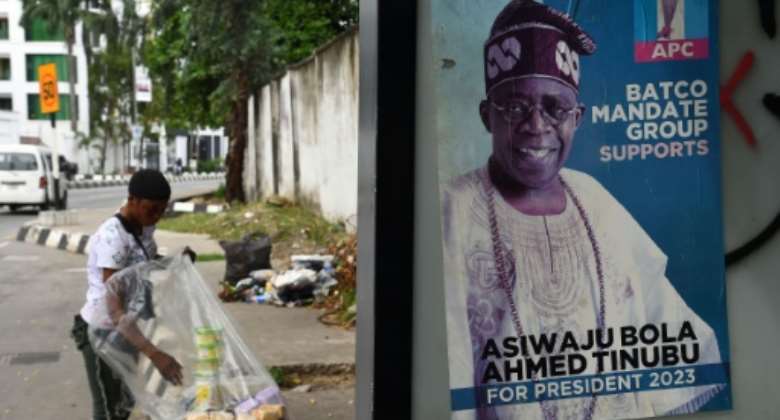 Bola Tinubu, 70, is one a dozen high-profile candidates looking to win the APC ruling party ticket for the 2023 election. By PIUS UTOMI EKPEI (AFP)

Commuters driving through Lagos's wealthy Ikoyi district have been greeted for months by the face of Bola Tinubu whose Nigeria presidential campaign posters are scattered around the city he once ran.

The former governor known locally as "Godfather of Lagos" looks down from one electronic billboard over the city's Falomo Bridge with a slogan touting him as a "great leader".

Tinubu, 70, may be confident of finally achieving his presidential ambition in the 2023 election, but he is just one in a packed field of high-profile potentials still scrambling for position.

Their political fates will be decided this weekend when the ruling All Progressives Congress party and opposition People's Democratic Party both hold primaries for candidates to govern Africa's most populous nation.

Deciding the APC and PDP candidates settles who will be the likely favourite to replace President Muhammadu Buhari, a former military commander stepping down after two terms.

Buhari, 79, leaves office with Nigeria still struggling with a jihadist conflict in its northeast and violent banditry and kidnapping in its northwest.

Africa's largest economy is also dealing with the double hits of the coronavirus pandemic and the Ukraine war that have pushed up fuel and food prices across the continent.

As delegates decide on candidates for the presidency, parliament and governorship races, all eyes will be on Buhari to see whom he endorses and whether he will push the APC to accept a consensus candidate.

He has also yet to approve an amendment to a new election law, which analysts say is clouding the way some delegates can vote for candidates in the primaries.

For the APC, Tinubu faces rivalry from former ally and Vice President Yemi Osinbajo who has been touting his experience helping run the federal government.

Tinubu and Osinbajo, who once worked together in Lagos State, have busily canvassed support from governors and local delegates in recent weeks.

"If there was anybody who can hit the ground running, that person is me," Osinbajo said on a delegate visit to southwest Ogun state.

Rotimi Amaechi, who recently resigned as Buhari's transport minister and who is from Nigeria's southern oil region, is also challenging the two top APC players.

An alliance of smaller parties drawn together for the 2015 election, the APC has often struggled to contain internal divisions.

For such a key primary competition, it is likely Buhari may again seek a consensus candidate as he did in March with the party convention to choose a new chairman.

"Because the conduct of the presidential primaries and the party's eventual nominee will help define Buhari's legacy, he will likely become involved," said Eurasia Group's Africa analyst Amaka Anuku.

"Osinbajo is the most obvious choice for Buhari's endorsement."

The PDP candidates include perennial challenger Atiku Abubakar who will be on his sixth attempt to run for the presidency. He has been promising a firm hand to end insecurity if elected.

Tinubu was the former Lagos governor and a powerful figure in the ruling APC party. By PIUS UTOMI EKPEI (AFP)

PDP also has a southern Christian candidate in Ezenwo Nyesom Wike, governor of Rivers State. He is also a financier of the PDP and influential in the party.

Since a return to democracy from a military dictatorship in 1999, Nigeria has held six national elections which were often marred by fraud claims, technical difficulties, violence and legal challenges.

In 2019, when Buhari was re-elected, the Independent National Electoral Commission was criticised for delaying the initial vote by a week. PDP's Abubakar who lost to Buhari challenged the results in court.

With Buhari still not approving an electoral law amendment, analysts say some candidates could open legal challenges as certain party delegates may be excluded from voting for them in primaries.

"We have to see what Buhari does, if he signs the law in time, it might change some things," said SBM Intelligence analyst Tunde Ajileye.

Under an informal agreement among the political elite, Nigeria's presidency is usually alternatively "zoned" between candidates from the north and the south.

After eight years under northerner Buhari, most agree the presidency should now go to a candidate from the south.

Rotating power in federal government has been seen as a balancing force in a country almost equally divided between the mostly Christian south and predominantly Muslim north.

"There is a general elite consensus to zone power to the south," SBM's Ajileye said.

Tinubu is a southern Muslim, Osinbajo is a southern Christian and Amaechi is also from the south as a former governor of oil-wealthy Rivers State.

Major PDP main candidates Abubakar and Tambuwal are also northerners, prompting speculation the opposition party may ditch the "zoning" tradition and go for a candidate from Nigeria's north.