We will fix flood affected roads—Amoako-Atta 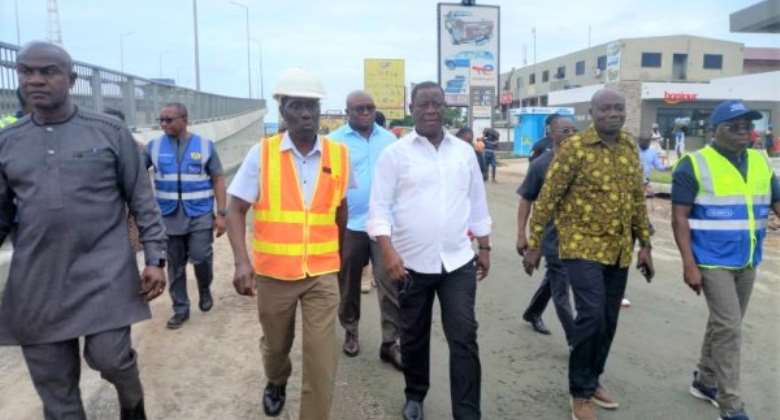 Kwesi Amoako- Atta, Minister of Roads and Highways has assured the citizenry of the Government's resolve to repair roads damaged by the floods.

''This is Government's quick response to deal with all such emergency situations to reduce to the barest minimum the hardship and inconveniences that the public will face. Government is alert and all other agencies including NADMO and Fire Service are playing their parts,'' he said.

Mr Amoako-Atta gave the assurance during a tour of the Kanshie Pamprom road near the Obetsebi Lamptey Interchange which has been destroyed by the recent floods.

The road to the area had been blocked to vehicular movements due to the damage caused by the torrential rainfall which started on Saturday, Monday and the early hours of Tuesday.

The Minister appealed to the traders, motorists and pedestrians to cooperate with the contractors and particularly the Police in managing the traffic.

He said the Ministry had put in place contingency measures with contractors on hand to deal with situations since they had been following the forecasts and advice of the Meteorological Services Department on rainfall.

''We don't anticipate disasters, but we should be proactive and prepared, hence, we have some selected contractors with the required equipment and capacity that will be called on to work within a short notice,'' he added.

Mr Amoako-Atta appealed to the public to change their attitudes and be disciplined because ''we are endangering our lives.''

''Even if 99 per cent of the population are disciplined and the one per cent decides to be indiscipline, they can undo all the good things that the majority are doing,'' he said.

The Minister commended the Police and drivers for their cooperation in managing the traffic situation.

Mr Amoako- Atta commended the contactors for their prompt response to repair the affected road while appealing to them to intensify working in the night in order to complete the construction on time.

Mr Owusu Sekyere-Antwi, the Resident Engineer, said the rains had washed away the asphalt and base materials of the road hence that part of the road would be have to reconstructed.