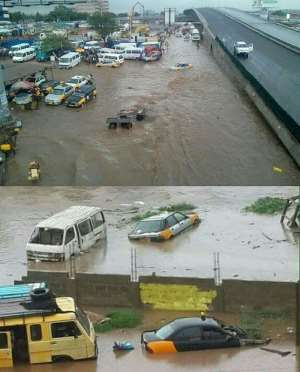 Parts of Accra were submerged following a downpour which lasted about 10 hours.

The rains which started yesterday lasted to the early hours of Tuesday destroyed properties running into several millions of cedis.

Some roads in Kaneshie in the Greater Accra Region were completely destroyed.

In addition, several people were trapped in their homes as they could not step out due to the volume of water and the magnitude of the current.

The floods resulted in heavy traffic and passengers were also spotted stranded at various bus stops waiting long hours for vehicles to their destinations.

'I know the general cost of living has gone up, my wife tell...
48 minutes ago