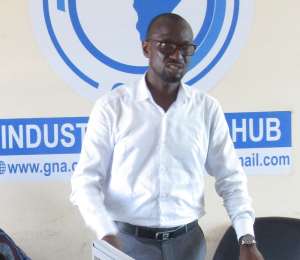 Mr. Emmanuel Wilson Jnr., the Chief Crusader of Crusaders Against Corruption, a civil society organization has said the imbalances in salary structures between public and civil servants and article 71 holders breed corruption among citizens.

Mr. Wilson Jnr. said having article 71 holders and government appointees get a lot of benefits and end of service benefits while a public servant such as police personnel might retire after decades of service without a good accommodation to boast of.

He said this speaking at the Ghana News Agency Tema Industrial News Hub Boardroom Dialogue a platform rolled out for state and non-state actors to address national issues on the topic; “Is the fight against corruption a reality or mirage? Which was monitored by the Communication for Development and Advocacy Consult (CDA Consult) in Tema

The engagement also serves as a motivational mechanism to recognize the editorial contribution of reporters towards national development in general and the growth and promotion of the Tema GNA as the industrial news hub.

Mr. Wilson emphasized that “we must not build an imbalanced society to force people to engage in corrupt practices, the government must make sure that our salary structure must be fair and rewarding enough.”

The corruption campaigner said in their quest to also make ends meet and secure their future, some public and civil servants ended up engaging in corrupt practices all due to the imbalance in the salaries being paid to them.

He, therefore, urged workers’ unions to prioritize their fight for an increase in their base salaries instead of taking labour actions because of allowances adding that allowances could be scraped as against that salaries.

He observed that when allowances when they push for the payment and increase in allowances, it would not benefit them when they retire, but when their salaries receive an upward adjustment, it would benefit them currently and in the future as it determined the amount to be paid as their social security and pension contributions.

Mr. Wilson Jnr said they must redefine their fights and demands from the government, saying they need to ask for a salary balance to be akin to that of the article 71 holders and politicians.

He noted that the implementation of the Single Spine Salary Structure (SSSS) had worsened the disparity in salaries, saying it did not achieve the intended purpose.

He said there was therefore the need to look at the salary structure to make it fair to all categories of workers, “we need to relook at our salary structure, the current disparity is too much.”

Touching on other factors contributing to corruption he said, the nature of the 1992 Constitution which he described as a ‘political constitution,’ and nepotism were affecting the fight against corruption in Ghana.

The Chief Campaigner said the problem Ghana has with the fight against corruption was the failure of successive governments to review the 1992 Constitution which he said was the biggest promoter of corrupt practices.

“The 1992 Constitution gives state institutions powers to fight against corruption with the left hand and uses the right hand to away those powers,” he said.

It said it happened so because the Constitution consolidates too much power in the President is expected to appoint every head of state-owned institutions including the ones mandated to fight corruption.

Touching on nepotism, Mr. Wilson indicated that it kills more than any of the factors, as those with the power to appoint gives preferential positions to only their family and friends making it a dangerous form of corruption.

He said, “when you pay a bribe, the amount involve is not the same as the effect of nepotism on the country and its citizens.”