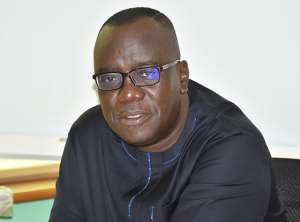 Government through the Ministry of Lands and Natural Resources has directed the Lands and Forestry Commissions to stop any land allocation in the name of the late Kwadwo Owusu Afriyie aka Sir John at the Achimota Forest area.

According to the minister, bequeathing of the aforementioned lands will not pass interest or will to the named beneficiaries in the alleged Will.

Subsequently, the government said the lands will remain public lands whether or not it falls within the de-gazzetted lands pursuant to E.I 144.

In a statement signed by Samuel Jinapor on Tuesday May 24, 2022 said preliminary checks at the Land Commission and Forestry Commission show no records of land at Achimota Forest and Ramsar Site at Sakumono in Tema for the late Kwadwo Owusu Afriyie.

Nevertheless, the government said it has declared any land in those areas which might belong to the former Forestry Commission boss as void.

The government has served notice that it will act on any improper acquisition of any public lands, regardless of how it was procured, whether now or in the past as the Achimota Forest land will not be exception.

A purported copy of the Will of the late Sir John has been widely shared on social media which sees him bequeathing portions of lands he has in the Achimota Forest to children and nephews.

The development has sparked anger among many Ghanaians with many taking to social media to express their disappointment over the fact that the former Forestry Commission head appropriated to himself part of the forest.

Sir John also disclosed in the Will that he also owned land at the Ramsar area in Sakumono in Tema where he had bequeathed to his sisters.

The revelations in his will come at a time the government is giving portions of the Achimota Forest land supposedly to its original owners, the Owoo family.

Amidst the public outrage about Sir John's supposed will, the Ministry of Lands and Natural Resources says it has requested all documents related to the land in question as part of an inquiry to ascertain the veracity of the claims.

Portions of the will that saw Sir John lands he possessed in the Achimota forest and willed to relatives showed that was a beneficial owner for some of the properties.

Parts of his will which has been circulating on social media reads: “I give my land situate at the Achimota Forest in the name of Jakaypro Limited and measuring 5.541 acres to the following persons forever.

It continued: “I give my land also situate at the Achimota Forest in the name of Fasoh Limited and measuring 0.987acres to my nephews Michael Owusu, Yaw Boadu and Kwabena Amoateng forever.”

The will further states: “I jointly own a piece of land at Achimota Forest with Charles Owusu. Upon my demise, my portion of the said land should be given to Ruth Korkor Odonkor.”

“I give my portion of land that jointly own at the Achimota Forest in the name of DML Limited to Elizabeth Asare Boateng who at the time of making this will is domiciled in the USA forever.”

Read the full government statement below