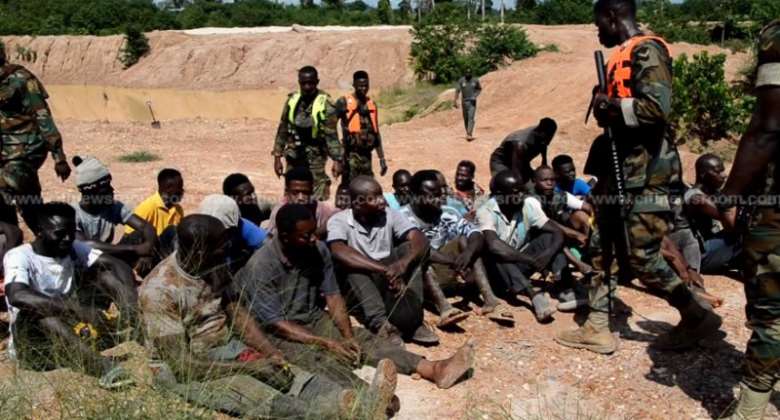 A Deputy Minister for Lands and Natural Resources, George Mireku Duker, on Monday, May 23 led the arrest of 26 sand winners and chainsaw operators on illegal mining sites in the Western Region.

George Mireku Duker made the arrest through a helicopter patrol of galamsey sites with journalists and military personnel at Wassa Dunkwa, Patasi and Asankragwa in the Western Region.

The Deputy Lands and Natural Resources Minister in a Citi News interview after touring the devastated galamsey sites, said government will not give up on the fight against illegal mining.

“We are moving around the river bodies making sure that people don’t mine in the river bodies. Unfortunately, we saw people mining, and some people were also caught winning sand, the reason being that they are using it for other purposes.”

“Obviously, they were not having any documents, but because they were not mining and also winning sand not at the bank of the river but elsewhere, we have to let them put the sand back because we will be using that for the reclamation assignment.”

While emphasizing on the need for miners to mine within the environmentally acceptable standard, George Mireku Duker reiterated government's commitment to clampdown on illegal small scale mining to protect river bodies.

“We are not saying don’t mine, but mine responsibly. If you come and they give you a kind of permit you will be allowed to mine. You cannot also mine where we are having a river body diverted so it’s very unfortunate that we experience these things and we will not relent on our efforts to clampdown these illegal miners.”

“We must resolve the matter now. What the Ministry is going ahead to do is to have River wardens where people would be permanently placed along the river banks to be patrolling. The military will intermittently move around to see if people are mining and they will be arrested. So it’s not something that we are going to stop”, he added.

The Deputy Lands Minister ensured that trucks caught with loads of sand from the galamsey sites were emptied at the site for future site reclamation, whiles the military destroyed makeshift structures erected by illegal miners who had taken to their heels.