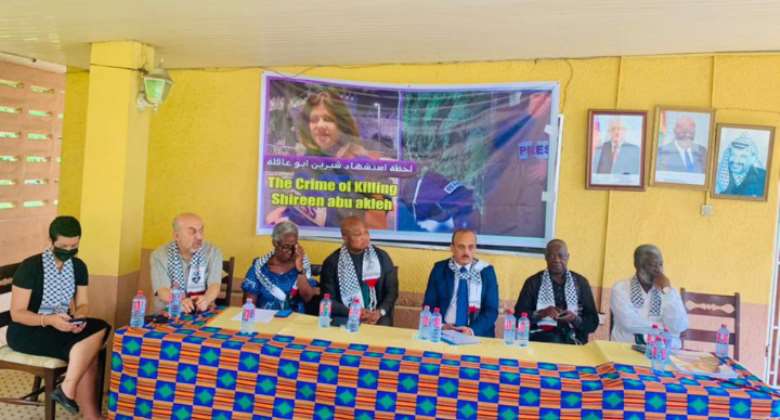 Dignitaries at the event

Mr. Abdulfattah Ahmed Khali Alsattari, Ambassador of the State of Palestine to Ghana has paid glowing tribute to the slain Aljazeera Journalist, Shireen Abu Akleh who was shot dead by Israeli forces, whiles in the line of duty at the occupied West bank.

He said her name continues to positively resonate after her demise.

According to him, the Israelis were surprised that Shireen Akleh, could pull over 40,000 Palestinians to mourn her when they (Israelis) thought about 100 to 150, would only show up to mourn her at East Jerusalem.

“They were afraid of her when she was alive, they must still be afraid of her even in death, and perhaps the over 40,000 people – Muslims and Christians – who showed up at the funeral.

“Shireen lived in our heart; we saw her on the TV every night when she reported,” Ambassador Alsatarri said in a sad voice.

The death of the renowned journalist has since prompted widespread condemnation across the globe including Israel's own human right groups and the Vatican.

Abu Akleh was wearing a press vest and was standing with other journalists when she was killed.

Another Al Jazeera journalist, Ali al-Samoudi, was also wounded by a bullet in the back at the scene.

Mr. Alsatarri, at a press briefing, disclosed that the Israeli Sniper who allegedly shot and killed the journalist was the same person who destroyed the Al-Jazeera office in Gaza.

He said the deceased journalist footprints that remain unwashed in the sands of time was due to the values she lived up to by loving each one she came in contact with irrespective of their race.

The ambassador, said the casket of the Aljazeera Journalist, was even attacked when it was taken from the hospital for burial at East Jerusalem.

“What is happening in the State of Palestine is a complete abuse of the human rights of citizens, but the West has stood aside and watched whiles killings of innocent people are going on in Iraq, Venezuela, Cuba and the rest," he noted.

“We are hopeful and we know everything will be over soon. They steal our resources and turn around to say we are poor”, Mr. Alsatarri added.

He condemned attacks on pallbearers and others during the funeral of the journalist, describing it as “terrible”.

The Member of Parliament for North Tongu, Mr. Samuel Okudzeto Ablakwa, who doubles as the ranking member of the Foreign Affairs Committee of Parliament condemned the assassination of Shireen Akleh.

He said, the late journalist, showed courage and gained popularity for her bravery in covering war.

“The Journalist was a voice for ordinary people whose story about the occupation of Palestinian land needed to be told which she did dispassionately," Mr. Okudzeto Ablakwa added.