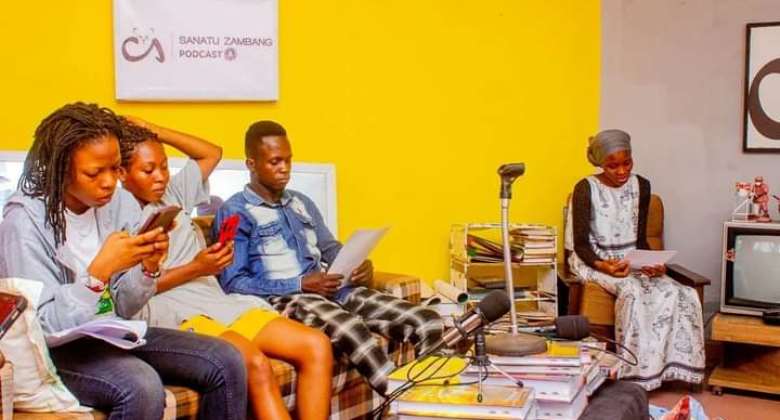 A lot has happened in the last few weeks that I wanted to share my thoughts on, but I was too engaged with other, more important things online and offline.

However, I'll begin by giving my honest judgment on a play produced by Swida Ghana and Sanatu Zambang Studios.

The play "Born a Female" is accessible on Sanatu Zambang Studios' Audiomack and YouTube platforms. It's a play about gender roles, defilement and rape in our society, and how the authorities should react when such unfortunate incidents happen.

I've listened to the play multiple times, but I always have to skip the part where Ziblim Shakira, a young girl, is raped by an old man. Her sole offense was asking the old man for assistance in carrying firewood. Mba Azindoo took advantage of the young girl to intrude where he had no right to be, just because there was no one else in the farm except the two of them.

This section of the narrative bothers me a lot because I've interviewed multiple defilement victims and they all tell almost the same story. It's usually an older person who takes advantage of them without thinking about the harm that their actions may cause.

The scene immediately following the rape wowed me. That was not what I had anticipated. The community's response to the catastrophe was incredible and should be emulated by all societies. Everyone in the community was surprised and disturbed by the tragedy without assigning blame to the vulnerable girl.

People have always discouraged me from pursuing defilement cases, and the majority of them always question, "Do you know what the female did to get defiled?" Some even claim that, nowadays, girls choose rape for themselves. Perhaps this explains why I am fascinated by the reaction of the residents. They acted responsibly and empathetically.

That isn't the only aspect of the play that fascinates me. The chief also reacts responsibly, rationally, and maturely. He immediately requested that health officials respond to Shakira, who was near death after the defilement.

His one action has a significant impact and is worth the recommendation. In the real world, especially in rural areas, when cases of defilement are reported to leaders, most of them focus on the calamities that have occurred rather than the welfare of the defiled.

When the chief ordered the police to arrest the criminal, I regarded the youth's protest as a little uncivilized but somehow "acceptable." Perhaps they desired instance justice since they had previously witnessed how the police rendered such cases "useless."

The Ghana police service, on numerous occasions, has been accused of frustrating victims and releasing criminals without bringing them to justice.

Nonetheless, whilst the youth believe that instance justice was the best alternative in this case, I disagree with them. I side with the chief and the family of the victim.

According to the 1992 constitution of Ghana, criminal cases must be heard in courts, not chief palaces or mob justice.

I like how the chief reassured the outraged youth that he was determined to see that justice was served to the vulnerable young girl. That's a true show of leadership.

I also enjoyed the herbalist's, eyewitnesses', and nurse's insightful presentations at the palace when they offered their testimonies. free of bias and personal sentiment.

The only aspect where I believe the nurses and even the police made a mistake was in sending the victim to the palace. That was the last thing I expected to happen. Even after the nurse recognized that the young girl was experiencing some mental distress, they should have protected her from the public.

There are numerous lessons to be learned from this brief drama. We learned how to handle gender-based violence cases properly by the police, health officials, and the community in which they occurred. We also learn about the risks of particular gender roles (defilement may have been averted if the male child, rather than the female, had been sent to the bush for firewood).

Swida Ghana and Sanatu Zambang deserve praise for this intriguing production. As they begin to implement the KASA Project, I expect to see more of this.