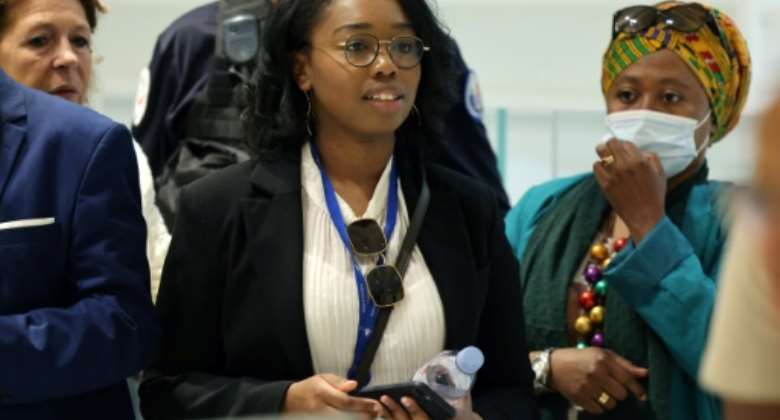 Bahia Bakari was just 12 when Yemenia Flight 626 crashed when trying to land in the Comoros in 2009. By Thomas SAMSON (AFP/File)

A woman who was just 12 when she survived the 2009 Yemenia Airways crash in the Comoros islands that killed all 152 others onboard described Monday the terrifying moments leading up to her plunge into the ocean and subsequent miraculous rescue, in the French trial against the airline.

Bahia Bakari, now 25, has sat through several hearings with her father but had not testified or spoken to journalists attending the trial that opened this month.

"I didn't see how I was going to get through this," Bakari told the court of her hours spent in the water holding on to a piece of debris, with "the taste of jet fuel" in her mouth.

Bakari and her mother left Paris on June 29, 2009, for her grandfather's wedding in the Comoros, changing planes in the Yemeni capital of Sanaa for the final leg of the trip.

"It was a smaller plane, there were flies inside and it smelled strongly like a bathroom," she said, but "the flight went normally" -- until the beginning of the landing descent.

During the night-time approach of Yemenia Flight 626 to Moroni, the capital of the Comoros islands that lie between Mozambique and Madagascar, the Airbus A310 jet plunged into the Indian Ocean with its engines running at full throttle.

"I started to feel the turbulence, but nobody was reacting much, so I told myself it must be normal," Bakari said as over 100 family members or friends of the victims listened in silence.

Suddenly "I felt something like an electric shock go through my body", she told the court.

"There's a black hole between the moment when I was seated in the plane and the moment I found myself in the water."

France's overseas territory of Mayotte is part of the Comoros archipelago, and 66 French citizens were among the 142 passengers and 11 crew members aboard.

Investigators and experts found there was nothing wrong with the aircraft, blaming instead "inappropriate actions by the crew during the approach to Moroni airport, leading to them losing control".

No one from Yemenia Airlines has appeared at the trial, where prosecutors have accused the company of pilot training programmes "riddled with gaps" and of continuing to fly to Moroni at night despite its non-functioning landing lights.

Yemenia is charged with involuntary homicide and injuries. The company's lawyers have denied any wrongdoing.

Bakari, regaining consciousness in choppy waters, recalled waiting for hours in the water, trying to climb atop the largest piece of debris she could reach, but without the strength to succeed.

"I realised that voices were calling for help in Comorian, and I cried out a bit but without much hope, because there's was nothing but water around me and I couldn't see anyone," she said.

"I ended up falling asleep while holding onto the plane debris," and while she could see the coast when she woke up, "the water was really choppy."

It was thinking of her "incredibly protective" mother that helped her to hold on until she was rescued by a boat after a dozen hours in the water.

Initially she was convinced "that I was the only one who fell" and that the other passengers had arrived safely, before a psychologist at the hospital told her she was the only survivor.

"The hardest thing for me has been dealing with the grief for my mother, I was very close to her," Bakari said, her voice breaking and tears flowing for the first time during her testimony.

The Yemeni national airline, whose representatives said they could not attend the trial amid the long-running civil war in their country, faces a maximum fine of 225,000 euros ($240,000).

"It's really a shame. Even if the current management wasn't in charge at the time, it's still their company. And I and these families would have liked them to listen to us," Bakari told reporters after leaving the courtroom.

"Because often we talk about the little girl who survived, but this was first and foremost a tragedy."