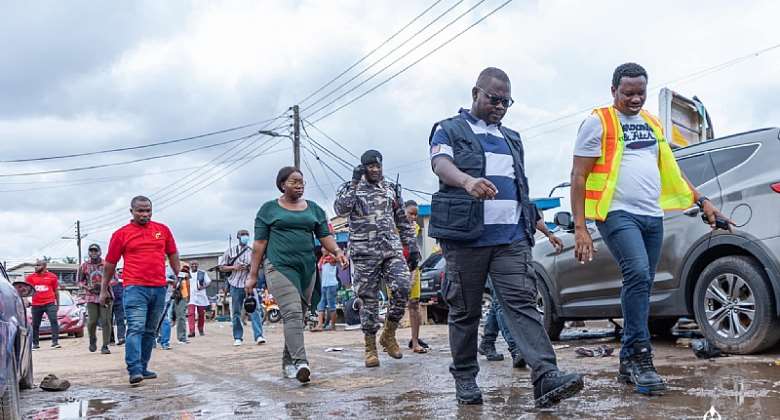 The Minister for Works and Housing, Hon. Asenso-Boakye has charged heads of Metropolitan, Municipal, and District Assemblies to ensure strict enforcement of planning and building laws to help mitigate the country’s age-old flooding problem.

Following heavy rains over the weekend, especially on Saturday night, several parts of the country particularly in the capital, Accra were flooded.

After visiting some of the affected areas, Hon. Asenso-Boakye has stressed that it will take a collective effort to deal with the problem.

Speaking to the media after a tour, the Works and Housing Minister called on the general public to support the government by maintaining proper solid waste disposal practices.

“I urge you to support Governmental efforts by maintaining proper solid waste practices. I have called on MMDAs to strictly enforce planning and building laws to help mitigate flooding in the country,” Hon. Asenso-Boakye said as reported by the Ministry of Information.

The Minister further disclosed that on the part of the government, some, GHS450 million investments have been made to help solve the problem.

He said the government remains committed and will continue to work to deal with flooding in the country.

“In the last 5yrs, Government has spent GH¢450 million to invest in the expansion of the drains including digging deep and concrete lining and that is to increase the drain capacity to carry more stormwater,” Hon. Asenso-Boakye added.

Hottest Photo Reports
Catch up with all the political quotes from our politicians.
Advertise here
More from Headlines
ModernGhana Links
Akufo-Addo going to IMF is not victory, it's a day of sadness - Joe Jackson
IMF bailout: Free SHS, other programs must be redesigned– Seth Terkper
Guinea Bissau President elected new ECOWAS chair, takes over from Akufo-Addo
TOP STORIES

Akufo-Addo going to IMF is not victory, it's a day of sadnes...
51 minutes ago