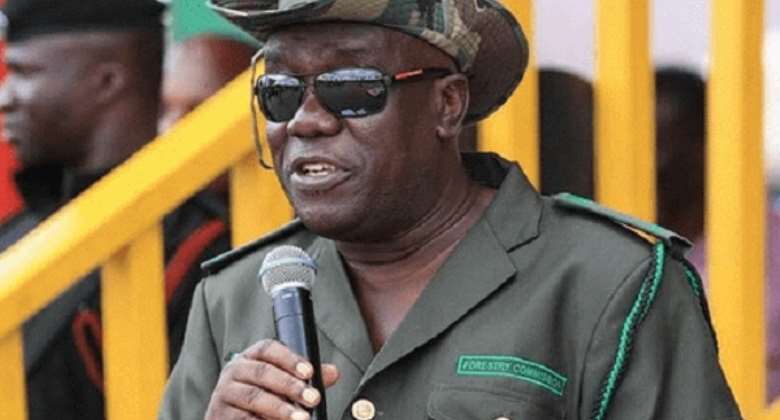 When President Akufo-Addo signed an executive instrument declassifying parts of the Achimota Forest as a forest reserve, many Ghanaians greeted the decision with outrage.

Many took to social media and accused the political elite of attempts to sell the lands to themselves and their cronies. The government has denied the accusations, saying it was only returning part of the land to its rightful owners.

But even as the dust on the Achimota Forest controversy is yet to settle, the will of a former general secretary of the governing New Patriotic Party , Kwadwo Owusu Afriyie, had emerged and contains some parcel of lands at the Achimota Forest.

Until his death, Kwadwo Owusu Afriyie, popularly known as Sir John, was the Chief Executive Officer of the Forestry Commission.

The will, which has been sighted and confirmed by The Fourth Estate , contains four parcels of specified and unspecified acres of land in the Achimota Forest, which the late politician bequeathed to named persons.

On page 4 of the will, Kwadwo Owusu Afriyie, whose office was situated at the Achimota Forest until his death, states:

“I give my land situate at the Achimota Forest in the name of Jakaypro Limited and measuring 5.541 acres to the following persons forever.

On page 5 of the will, it is stated: “I give my land also situate at the Achimota Forest in the name of Fasoh Limited and measuring 0.987acres to my nephews Michael Owusu, Yaw Boadu and Kwabena Amoateng forever.”

On the same page, the will states: “I jointly own a piece of land at Achimota Forest with Charles Owusu. Upon my demise, my portion of the said land should be given to Ruth Korkor Odonkor.”

That’s not all. On the same page 5 and still on the Achimota Forest, the will states: “I give my portion of land that jointly own at the Achimota Forest in the name of DML Limited to Elizabeth Asare Boateng who at the time of making this will is domiciled in the USA forever.”

The former head of the forestry commission also stated in the will that he owned land at the Ramsar area in Sakumono in Accra.

The Centre for Remote Sensing and Geographic Information Services (CERSGIS) defines a Ramsar site as “a wetlands site designated to be of international importance under the Ramsar convention. It provides for national action and international cooperation regarding the conservation of wetlands, and wise sustainable use of their resources.”

According to CERSGIS, the Sakumono site “is the only wetland wholly owned by the government and is meant for protecting Sakumono, Tema and their environs against floods and pollution, for the breeding of fish for the Sakumono Lagoon, as well as recreational activities.”

In June 2021, officials of CERSGIS and the Forestry Commission visited the site and observed that the site had “come under serious threat to the brink of extinction due to the heavy encroachment that had plagued the area for over three decades.”

The Forestry Commission, which Kwadwo Owusu Afriyie headed until his death, has published the Wetland Management (Ramsar Sites) Regulations 1999 that lists the Sakumono Ramsar site as part of the protected wetlands in Ghana. It prohibits a host of human activities in Ramsar sites.

He made his latest will on May 21, 2020, less than two months before his death. The will named Charles Owusu and Nana Boakye Acheampong as executors.

It contained houses, lands, Kejetia market stalls, gold production investments and money in local and foreign banks as the properties to be distributed among the named persons in the will.

Ministry reacts to will

Meanwhile, the Ministry of Lands and Natural Resources has indicated it will investigate the alleged inclusion of Achimota Forest lands in Sir John’s will.

“The attention of the Ministry of Lands and Natural Resources has been drawn to a document making the rounds on social media, which alleges that the late former Chief Executive Officer of the Forestry Commission, Kwadwo Owusu Afriyie, had included portions of the Achimota Forest in his Will, and given out same to individuals who are said to be related to him.

“The Ministry takes a very serious view of the allegations and has requested for all documents relating to the lands in question, as part of an initial inquiry to ascertain the veracity of the claims. Considering that the issues that form the basis of the allegations predate the tenure of the current Minister, Hon. Samuel A. Jinapor, MP, it is important that he is seized with the full facts to enable him take appropriate action, if, indeed, there is any merit in the claims.

“The Ministry assures the general public and the good people of Ghana that it will ensure that the national interest is protected at all times, especially in matters pertaining to the Achimota Forest.”

Below are pages from the will of Kwadwo Owusu Afriyie (Sir John):