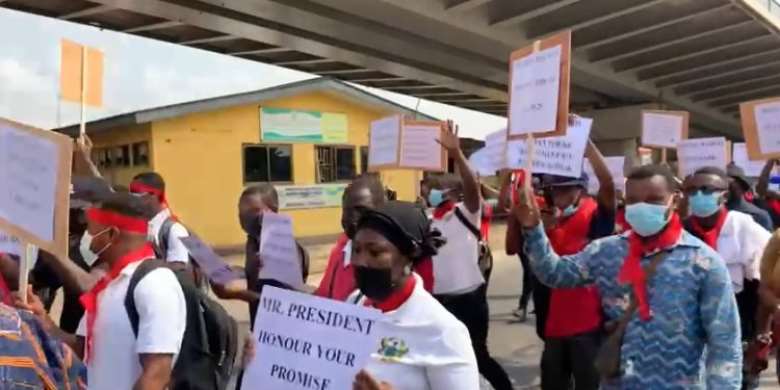 The Nation Builders' Corps (NABCo) Trainees Association of Ghana is appealing to the government to pay up allowances of its members which have been in areas for the past seven months.

The trainees say “they have been plunged into a point of no hope as the government has turned deaf ears to the pressing issues.”

They complained that the situation on the ground is not reflective of the promises made by the government to invest in the youth through job creation.

“We are asking the goverment this simple question: although we have been told of the soon-to-come arrears/permanent arrangement, until when?”

“We are dying of hunger and may not live to see the economy bounce back, due to non-payment of seven (7) months arrears.”

The programme operates seven modules designed to meet the pressing needs of the nation, while providing jobs for the teeming youth who have received tertiary education but are struggling to find jobs.

The beneficiaries were engaged for three years and earned a monthly stipend of GH¢700 each.

The three-year-long contract with over 100,000 beneficiaries under six modules ended in October 2021.

But the government instructed various agencies to maintain these beneficiaries as steps were taken to finalise their exit.

Amongst the options for the beneficiaries were for them to be maintained, continue their education, or venture into their own businesses.

But the trainees are complaining that the government is not paying attention to those who want to be maintained.

Akufo-Addo going to IMF is not victory, it's a day of sadnes...
24 minutes ago