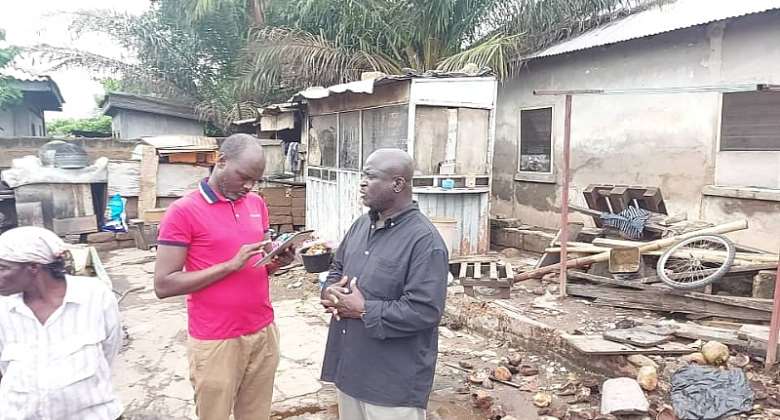 Hon. Adjei Tawiah( right) interacting with a journalist during the tour

The Municipal Chief Executive (MCE) for the Korle Klottey Municipal Assembly ( KOKMA) Hon. Nii Adjei Tawiah has visited some communities within his Municipality affected by the heavy downpour that occurred on Saturday evening.

The visit was to amongst other things sympathise with the victims, ascertain the extent of damage and assure them of government’s support to ensure lasting solutions to the problem.

The MCE pointed out that as an Assembly, they have done a lot to mitigate the plight of residents during the rainy seasons. He mentioned that they have undertaken the desilting exercises of various gutters within the Municipality long before the rain sets in.

According to him, but for the desilting exercise, the consequences of the downpour would have been more severe than what was witnessed on Saturday.

He bemoaned that many houses and offices that had constructed pavements in front of their buildings had no adequate open spaces for desilting.

He therefore asked owners of such buildings to try as much as they can to create spaces where people can go under to desilt the gutters from time to time.

He revealed that they had invited owners of such buildings to a meeting at his office on Monday to help find ways of solving that problem to prevent the perennial flooding in the Municipality during rainy periods.

He also pointed out that one woman who has done a tremendous job in the area by gathering all the coconut husks at one place is facing challenges. To that end, he recommended the availability of many more rubbish containers to be carrying the husks for disposal.

"We appreciate the efforts of the woman and we think it is better we collaborate and support make her work more flexible and better for the benefit of residents of a Korle Klottey. It is to prevent the husks from running into people’s houses, offices and gutters hence the need to help that woman," he stated.

He announced that she has been also invited to attend a meeting at his office on a Monday to find ways of supporting her work effectively and diligently. "As a government that supports private entities to thrive, we shall engage her in fruitful deliberations and find ways to support her."

Hon. Nii Adjei Tawaiah whilst calling for the need for his Assembly to double its efforts in its quest to end or mitigate the effects of flooding in the Municipality also cautioned residents to desist from indiscriminate disposal of refuse into the gutters when it is raining.