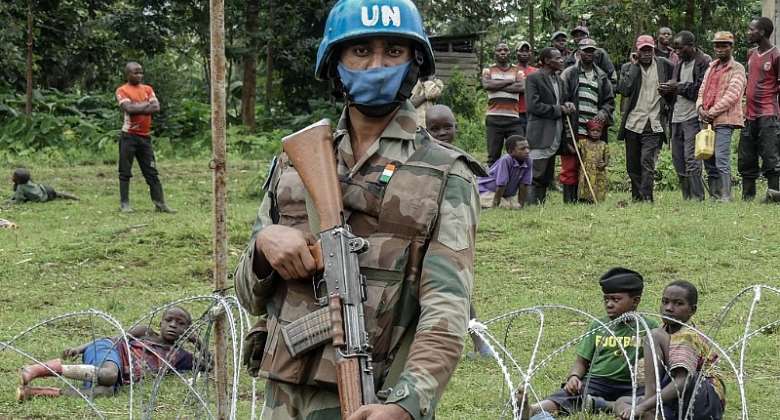 A peacekeeper protects civilians who fled violent clashes between the army and the ex-rebels of the &quot;M23&quot; in eastern DRC in January 2022. - Source: Photo by Glody Murhabazi/AFP via GettyImages

Since March 2022, fighting has escalated in eastern Democratic Republic of the Congo (DRC) between the army and the rebel group March 23 Movement , more widely known as M23. The group allegedly attacked army positions near the border with Uganda and Rwanda. In addition, a UN helicopter crashed in the combat zone leaving eight peacekeepers dead.

These events made headlines worldwide and led to a reaction from the United Nations Secretary-General António Guterres.

The uptick in fighting between M23 and government troops in fact started in late 2021 . Moreover, it is only one of several ongoing armed confrontations in eastern DRC. The Allied Democratic Force , an insurgent Islamist group with Ugandan roots, continues to massacre people despite ongoing joint Uganda-DRC operations. Another is the proxy war in the highlands of Uvira and Fizi , not far from Burundi. And in Ituri at the northeastern tip of the DRC, different armed groups including the CODECO factions continue to wreak havoc .

Yet, the clashes in March 2022 were the most serious in 10 years between the Congolese army and the M23. This raises important questions about timing and context, which we explore in this article.

Both of us have researched conflict dynamics in eastern Congo for many years. This includes the role of armed groups in society , the interplay of armed mobilisation with a recent Ebola outbreak , and the overall fragmentation of belligerents .

As part of this research, we have also analysed the development of the M23 since its early beginnings in 2012 until today. In our view, it is likely that the group's upsurge in activities since late 2021 is a reaction to Kinshasa's attempts to end insecurity in the east. The M23 may feel threatened while at the same time seeking to strengthen its position in the event of any negotiations.

President Félix Tshisekedi has made security in eastern Congo one of his main priorities. He has tried different strategies to accomplish this. These include negotiations with armed groups, a demobilisation and disarmament programme and declaring a state of siege in the provinces of North Kivu and Ituri.

But, as recent research highlights , this combination of tactics have rarely worked well in the past.

It is therefore unlikely that the current flurry of initiatives will end the M23 and other rebellions for good, as long as the underlying historical issues fuelling violence remain unaddressed.

Formed in April 2012, the M23 has always been perched at the intersection between local, national, and regional power dynamics , where it partakes in different struggles for control over territory, people and resources. These struggles are linked to the security concerns of different political and cross-border military networks , which rassemble both state and non-state actors.

The M23 rapidly shot to international notoriety when it occupied the city of Goma , capital North Kivu province, for 10 days in November 2012. This followed eight months of intense fighting in Rutshuru area of North Kivu province.

These events were a massive embarrassment to the international community which had invested billions of dollars in peace and statebuilding in the DRC, especially through its UN peacekeeping mission . But the mission was reduced to bystanders as the M23 marched into Goma.

While the rebels withdrew after strong international pressure, they continued to control key strategic sites, such as the Bunagana border post to Uganda. These provided them with significant income from taxation.

Ultimately, the group's ability to challenge the Congolese government and the UN became its undoing.

In 2013, a new component to the UN peacekeeping mission was charged with dismantling eastern DRC's armed groups. It was called the Force Intervention Brigade (FIB). It was composed of regional armies and made the M23 its first and prime target. Internal tensions also triggered a split inside the M23, leaving the group weakened exiled in Uganda and Rwanda .

After its defeat, the M23 signed a peace deal with the government in December 2013 in which it agreed to demobilise its fighters and transform itself into a political party.

However, led by commander Sultani Makenga, parts of the group returned to the DRC already in late 2016 . This was a predictable outcome as the peace deals failed to address the conflicts underlying issues.

An important feature of the genealogy of armed groups to which the M23 belongs is that they have been led mainly by Tutsi commanders from North Kivu. Historically, these commanders have entertained close ties with the Rwandan military. In the early 1990s, as reported to one of us in multiple interviews, several joined the Rwandan Patriotic Front in its struggle to overthrow the extremist Hutu regime in Rwanda, which carried out the genocide in Rwanda.

A major driving force of rebellions such as the M23 has been the insecure position of the Tutsi community in North Kivu due to a complex combination of interconnected causes. The first is the divide and rule policies of the colonial state (1885-1960) and the regime of Mobutu Sese Seko (1965-1997). In the 1990s, the Mobutu regime fuelled longstanding conflicts between Kinyarwanda-speaking populations, both Hutu and Tutsi, and other communities in eastern Congo by denying the latter citizenship rights of the latter, which sparked violent conflicts in the east .

Second is the political propaganda that falsely label all Kinyarwanda-speakers in eastern DRC as “immigrants” rather than “citizens” despite the fact that several Kinyarwanda-speaking communities have been in DRC since long before colonisation .

It also has not helped that the Tutsi have been involved in several foreign-backed rebellions, in particular the RCD-Goma during 1998–2003.

Finally, members of the Tutsi economic élite have bought large tracts of land in a context where many peasants have become victims of land-grabbing by local élites.

All these factors have produced widespread resentment of the Tutsi, and Kinyarwanda-speaking communities in general. Conversely, the Tutsi from North Kivu, deplore the failure of the Congolese state to respect and protect them as citizens. This has led many Kinyarwanda-speakers to support successive rebellions as a means to seek protection against armed groups hostile to them.

What the future may hold

After the first clashes in March and April this year, the M23 declared multiple unilateral ceasefires . It also announced it was willing to lay down its arms for good. Then in April it promised to withdraw from the areas it had occupied after the fighting in late March and asked for a dialogue with the Congolese government .

But, fighting subsequently broke out again between the Congolese army and M23 units. Both sides accused each other of instigating the clashes. As result, the main faction of the M23, led by Sultani Makenga, was ejected from the Nairobi talks.

On a broader regional level, the M23's return coincides with several significant developments . These include negotiations leading to the DRC joining the East African Community and Uganda's military intervention north of the M23's area operation to combat the Allied Democratic Front.

Moreover, after half a decade of frictions marked by border closures, bilateral relations between Rwanda and Uganda seem to rapidly improving. This is in spite of geopolitical rivalry and competition over trade and infrastructure projects in eastern DRC.

On the ground in North Kivu, other Congolese armed groups have recently declared a new ad-hoc coalition , allegedly brokered by Congolese army officials. This is aimed at fighting the M23.

Thus, the M23 rebellion finds itself in the tiny but highly strategic border triangle between eastern DRC, Rwanda and Uganda, and at the centre of fast-paced and interlaced local and regional security and diplomatic developments.

Kasper Hoffmann receives funding from the Danish International Development Agency and the Social and Economic Research Council of the United Kingdom.

Christoph Vogel does not work for, consult, own shares in or receive funding from any company or organization that would benefit from this article, and has disclosed no relevant affiliations beyond their academic appointment.

By Kasper Hoffmann, Adjunct assistant professor, University of Copenhagen And

Hottest Photo Reports
Catch up with all the political quotes from our politicians.
Advertise here
More from Article
ModernGhana Links
COVID hurt West and Central Africa's small-scale fishers. They need more support
How marine fisheries can add millions of tonnes to Africa's catch
Following a fungus from genes to tree disease: a journey in science
TOP STORIES

Going to the IMF with Ken Ofori-Atta as the lead will yield ...
8 minutes ago