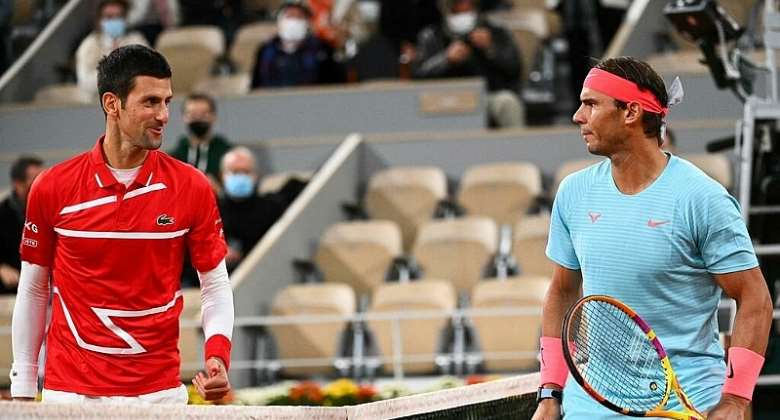 That groovy crew steering the good ship Roland Garros has come up with a rip-roaring idea to welcome the full complement of fans to the centre court at the 2022 French Open. Before each of the 10 night matches on Court Philippe Chatrier, a DJ will mix the sounds to be pumped through the weapons-grade sound system installed around encircling the arena.

Rafa and the Nadallas dancing in the seat? And why not? Amid the whoosh of tunes, a snazzy video presenting the evening's line-up will be shown on the giant screens.

And then, as the likes of Rafael Nadal, Iga Swiatek, Carlos Alcaraz and Novak Djokovic leave the locker rooms, they will follow an illuminated path that leads them out onto the court.

Tacky? Jury's out. Innovative? Definitely. And in the 130-odd years of the French Open and its other incarnations, certainly unprecedented. But after all, this is the modern world.

The slight change for all and sundry will be a super tiebreaker at 6-6 in the final set. It will be claimed by the first player to 10 points by a margin of two.

No more 12-10 marathon battles in the sun. Instant gratifications will replace those long journeys into mythology.

"It was necessary to preserve the players who were effectively saying goodbye to their tournament after a 16-14 win in the fifth set," said Amélie Mauresomo who took over from Guy Forget as tournament boss in December 2021.

"In terms of programming, it also allows us to be a lot more efficient."

Legend beckons in the women's draw though. Swiatek, the top seed, enters the competition as the scorchingly hot favourite.

During an unbeaten 28-match streak, the 20-year-old Pole has notched up titles on the hard courts in Doha, Indian Wells and Miami. And she has won on the clay courts in Stuttgart and Rome.

Should she reach the final in Paris, she will equal Serena Williams' 2013 run of 34 wins in a row.

And victory on 4 June would eclipse that sequence, furnish her with her second Grand Slam singles title and confirm her as the preeminent force since Ashleigh Barty announced her retirement from the sport.

"I haven't played a Grand Slam tournament since the streak started," said Swiatek on the eve of the French Open.

"So I guess we're going to see if everything I have been doing before is going to be enough. But I have really positive thoughts."

Ominous comments for the likes of third seed Paula Badosa, who reached the last eight in 2021 and last year's semi-finalist Maria Sakkari.

Swiatek became Poland's first Grand Slam singles champion when she won at Roland Garros in 2020. Her title defence ended in a quarter-final defeat to Sakkari.

Confidence
A year on, there is a different hue to Swiatek's demeanour.

"I'm more relaxed," Swiatek confessed. "I proved to myself and to other people that I can be in the top of the game.

"Before I wasn't feeling that much confidence, so this year I feel much more peace."

Swiatek will be seeded to meet the defending champion Barbora Krejcikova in the final on 4 June.

She was a surprise winner and this year she will attempt to put aside the elbow injury that kept her off the tour for nearly three months.

"At first I was disappointed and sad to be away from the circuit," said the 26-year-old Czech who will start her title defence against the local heroine Diane Parry.

"But it was good to get a break. I was able to spend time with family and friends, go to the theatre and get new visions of things from different people," added Krejicova.

"But I started to miss tennis about a month ago, so I'm glad to be back."

Her guile and court craft were hailed as she schemed her way to her first Grand Slam singles title and she accompanied that feat with the doubles crown with Katarina Siniakova to become the first woman to pull off such a double since Mary Pierce in 2000.

None of the contenders for the Coupe des Mousquetaires are attempting such pyrotechnics.

Thirteen-time champion Nadal, who won a record 21st Grand Slam singles trophy at the Australian Open in Janaury, continues to nurse the injury to his left foot that crippled him at the Italian Open a fortnight ago.

“It looks like there are players that are in better shape than me, without a doubt," said Nadal who will be 36 on 3 June. "But you never know what can happen in the next couple of days.

Djokovic, the men's top seed, overcame Nadal in the 2021 semi-final on the way to a second French Open trophy.

The Serb, who turns 35 during the tournament, was the epitome of coiled confidence as he weighed up the array of adversaries obsructing his path to a third title and a record-equalling 21st singles crown at a Grand Slam tournament.

"When we talk about favourites for Roland Garros and clay court tournaments, Nadal has to be right at the top because of his records particularly in this tournament," Djokovic said.

"And then you have Alcaraz who's been the story of men's tennis in the last four or five months – with reason because he has made quantum jump in terms of rankings and results for someone of his age."

At the Madrid Masters in May, the 19-year-old Spaniard became the first player to beat Nadal and Djokovic in the same clay court tournament.

He was ranked 97th during his run to the third round at the French Open in 2021.

This year, he is the sixth seed and lurks in the same quarter as Djokovic and his idol Nadal.

"I feel like I am in contention to fight for any Grand Slam trophy," added Djokovic.

And he proved his surge to form at the Rome Masters where he claimed his fifth title in the Italian capital with a 6-0, 7-6 victory over Stefanos Tsitsipas – one of a host of ambitious twentysomethings that includes Alexander Zverev and Andrey Rublev who are seeking a first Grand Slam singles crown

"There are plenty of players who want to get their hands on the title in a couple of weeks," added Djokovic.

"But I believe in my own abilities to go far and fight for one of the most prestigious trophies in the world."

Such aspirations have faded into distant memories for French veterans Gilles Simon and Jo-Wilfried Tsonga who have benefited from invitations from the French Tennis Federation to say their adieus to their home Grand Slam tournament.

Simon, 37, who will retire at the end of the season, said it was simply time to terminate a career during which he rose to number six in the world.

Tsonga, also 37, who climbed as high as five during his heyday, will step away from the courts after the French Open.

That departure is likely to come after a first round match against the eighth seed Casper Ruud.

Looking back on his 12 vistis to the tournament, Tsonga said: "It's been amazing the way the crowds have welcomed me on Philippe Chatrier or Suzanne Lenglen.

"It's always disappointing to lose here. But as I'm very close to the end, I can just say I was lucky to have lived this kind of life with these kind of moments."

Tsonga reached the semis twice in Paris during a career that furnished him with 18 titles – the second most successful French player behind Yannick Noah since tennis became open to professionals in the late 1960s.

"He brought a lot of positive attention to tennis with the way he was behaving and playing," said Djokovic, who won the first of his 20 Grand Slam trophies at the Australian Open in 2008 at Tsonga's expense.

"I've got a lot of respect for Jo. We've always got on well and he's been a really nice guy. He can be proud of everything he has achieved in the sport."

Expect the video screens and that sound system to go into audio-visual uberdrive during the on-court tributes to Tsonga.

It will be emotional, heart-felt, vibrant and vivid. Pure Jo.

Hottest Photo Reports
Catch up with all the political quotes from our politicians.
Advertise here
More from Tennis
ModernGhana Links
TOP STORIES