By Folahanmi Aina - The Conversation
Article 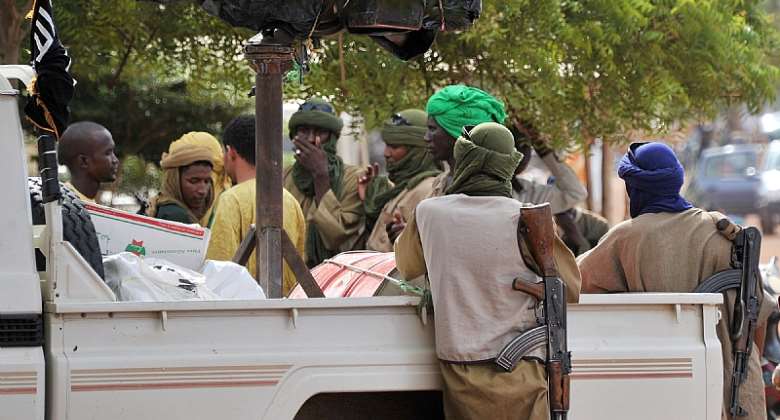 A group of armed Islamists gathered in Gao, northern Mali in 2012. Now such groups are seeking foothold in Togo. - Source: Photo by Issouf Sanogo/AFP via Getty Images

The threat of violent extremism across West Africa has been on the rise in recent times.

Boko Haram and the Islamic State in West Africa Province have been active in the Lake Chad Basin region. Jama'a Nusrat ul-Islam wa al-Muslimin , the Islamic State in the Greater Sahara and Ansarul Islam in the Sahel . The implications for the peace and security of the sub-region have never been more pronounced.

The activities of these groups have led to the deaths of thousands and displaced many others across parts of West Africa. The result is a worsening humanitarian crisis .

Togo, despite its proximity to countries affected by violent extremism, is one West African country that has experienced relative peace and security, until recently. On May 10 and 11 jihadists attacked a Togolese military outpost and killed eight Togolese soldiers.

The incident was only a few kilometres away from neighbouring Burkina Faso, which struggles with incessant attacks from violent extremist organisations .

The African Union condemned the attack and called on neighbouring states to redouble their efforts against terrorism in the region.

No group has claimed responsibility yet for the latest attack, but the Terrorism Research & Analysis Consortium, one of the world's largest databases of terrorists and terrorist groups, points a finger at Jama'a Nusrat ul-Islam wa al-Muslimin. The group is backed by al-Qaida and operates in the Sahel region .

It is not the first time Togo has experienced an attack of this nature on security forces. The first was in November 2021, when a security post in a northern village was attacked .

The question is why these attacks have begun and what they imply for peace and security in the region.

Having closely monitored the conflict and security dynamics of West Africa for over a decade, I am convinced the attacks have to do with the need of violent extremist organisations to establish a presence in Togo as part of a broader recruitment drive.

Furthermore, the underlying socio-economic conditions in Togo make it a prime target for extremist activities. Togo bears the hallmarks of a fragile state in which violent extremism could thrive.

Some of the warning signs for countries being vulnerable to violent extremism are high rates of poverty, inequality, illiteracy, unemployment, corruption, weak institutions and poor governance.

Togo has a population of just over 8.5 million . Its gross domestic product stood at US$7.5 billion in 2020 . That of its immediate neighbour, Ghana, with a population of 32 million , was US$72.3 billion .

Over 50% of Togo's population live below the poverty line of US$1.25 per day. It is one of the most underdeveloped countries in the world as measured by the Human Development Index which is based indicators such as life expectancy, education and per capita income. In 2019, Togo's index score was about 0.15, positioning it 167th out of 189 countries .

Togo has the conditions for extremism to take root.

Poverty contributes to violent extremism as it can provide a way, for those that are desperate, out of economic hardship. Recruits are often provided with an income and protection.

When people are not educated, they're more vulnerable to exploitation and ideological manipulation.

Furthermore, low human capital development reinforces societal cleavages created as a result of years of neglect and poor governance, leading to marginalisation. This creates feelings of abandonment and resentment, a potential driver of violent extremism once allowed to fester and left unchecked.

Togo's indicators tell us that it's falling behind. This has also resulted in a heightened state of frustration among its citizens, most of which is directed at the state's authoritarian rule .

These grievances have been expressed through street protests .

A previous attempt at infiltrating Togo in the same place as the latest attacks, could signal a coordinated effort by violent extremist organisations to exploit these local grievances.

Togo joins the ranks of other countries in the region that have experienced terrorism attacks by violent extremist organisations. These include Cameroon, Chad, Niger, Nigeria, Benin, Côte d'Ivoire and Burkina Faso.

Peace and security across the region is further threatened by the recent decision of the Malian junta to withdraw from the G5 Sahel force. The force, which is expected to contribute to peace, has suffered some operational hindrances owing to a lack of funds. Mali's withdrawal could trigger other Sahelian states to opt out to suit their own strategic interests.

Though the affected states in West Africa have commenced a regional response to the threat of violent extremism, such as Operation Koudanlgou 4 Zone 2 , its sustainability remains uncertain due to insufficient funding.

The same can be said of the Accra Initiative , which was launched in 2017 by Benin, Burkina Faso, Côte d'Ivoire, Ghana and Togo in response to violent extremism and transnational organised crime.

Most of the countries in the region are poor. They have operational funding challenges and insufficiently equipped military forces. They lack smart technology such as unmanned aerial vehicles (drones) for intelligence, reconnaissance, and surveillance missions at the borderlands.

By establishing a presence in Togo, extremist groups stand to gain by recruiting foot soldiers. Being in northern Togo also puts them close to Burkina Faso, enabling cross-border collaborations and attacks with other violent extremists operating in the area.

The more violent extremist organisations are able to demonstrate their viciousness, the more international attention they attract, that gives them a negotiating edge, as well as financial and logistical support from their parent organisation – in this case Al-Qaida.

West African states must act quickly and decisively to avert instability across the sub-region from violent extremism. Given the constraints highlighted above, they must prioritise efforts aimed at addressing the underlying socio-economic triggers of violent extremism, in addition to fundamentally improving relations between the state and society.

Folahanmi Aina does not work for, consult, own shares in or receive funding from any company or organisation that would benefit from this article, and has disclosed no relevant affiliations beyond their academic appointment.

Franklin Cudjoe back calls for probe into Covid-19 expenditu...
30 minutes ago

North East: One killed in clash between two communities
30 minutes ago