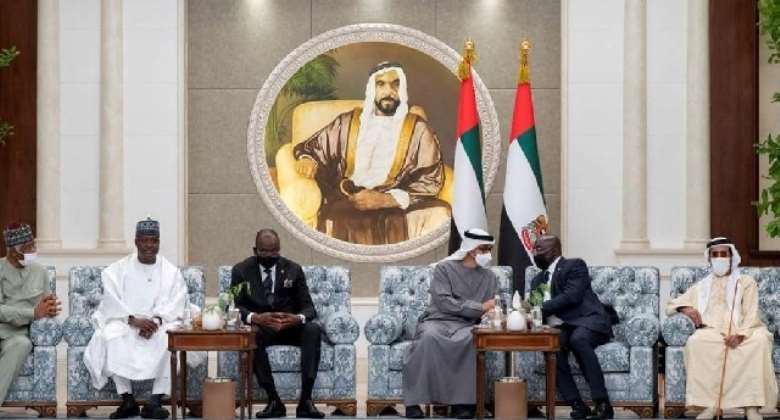 Vice President Dr Mahamudu Bawumia on Friday, May 20, on behalf of President Nana Akufo-Addo led a government delegation to the United Arab Emirates (UAE) to commiserate with the family on the death of President Sheikh Khalifa bin Zayed Al Nahyan.

Earlier in the week, Dr Bawumia signed the book of condolence at the Embassy of the United Arab Emirates (UAE) in Accra.

“May Allah welcomes him and grant him Jannatul Firdaus,” Dr Bawumia said.

UAE has announced a 40-day mourning period with flags at half-mast.

Work was suspended in the public and private sectors for the first three days, starting last Saturday.

He has since been buried in accordance with Islamic customs.

Hottest Photo Reports
Catch up with all the political quotes from our politicians.
Advertise here
More from Headlines
ModernGhana Links
Unofficial Prime Minister Gabby was right; E-Levy has been spectacular failure – Mahama
Remove the dead woods in your gov’t turning their ministries into their kingdom — Mahama to Akufo-Addo
Airport Company not privy to Frontiers, First Atlantic contract – Transport Minister reveals
TOP STORIES