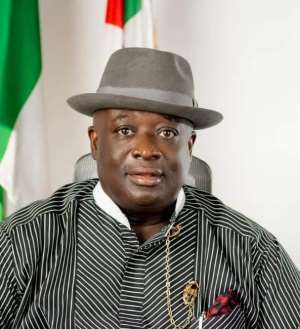 Chieftain of the All Progressives Congress and erstwhile National Publicity Secretary of the defunct New People’s Democratic Party (nPDP), Chief Eze Chukwuemeka Eze, has commended the hitch-free delegate congress of the Rivers State Chapter of the APC held across the 319 wards of the state, to choose those who will represent the teeming members of the party to the primary elections for the various elective public offices ahead of the 2023 elections.

In a statement made available to media houses in Port Harcourt, the Party Chief described the success of the exercise across the wards as the commitment of the party towards doing everything within human endeavor and the province of law to win the 2023 elections in the state and liberate the state and her people from the shackles of poverty.

Similarly, Eze described the violence perpetrated at the state party secretariat in Port Harcourt by hoodlums and dogs of vandals allegedly contracted by former Rivers Southeast Senator, Mr. Magnus Ngei Abe, as depicting the later’s avowal to truncate every progressive efforts to strengthen eternal democracy and rule of law within the party and plunge her deeper into the dirty waters of political combats.

“It is sad and equally unfortunate that Senator Magnus Abe is towing the path of self-destruct same line of action he took during the 2019 elections that stopped Rivers State APC from participating in the 2019 general elections just to achieve his sinister agenda of frustrating APC from her path to the Brick House and pave way for the opposition in 2023.”

Recall that while responsible party men and women were dutifully engaged with activities connected to the delegate congress on Wednesday, Abe and his enchanted group of conscienceless political thugs, protested to the party office to disrupt activities and cause mayhem in a bid to paint the picture of political instability in the party and further taint the public image of the Nigerian Presidential aspirant Chibuike Rotimi Amaechi.

“Mobilising PDP members to disrupt the ongoing APC Congress and creating the type of scene created in 2019 just to continue your devious plots of tarnishing the image of your benefactor and Leader of APC in the region, Rt. Hon. Chibuike Rotimi Amaechi, is most unfortunate.”

Eze counseled Senator Abe to stop his all-time shenanigan ploy and play his game as a matured politician, noting that his planned scheme against the Rivers APC will hit the rock and that will definitely ruin further, his political career.

The party stalwart said falsely going about with the name of Senator Ahmed Tinubu, the APC National Leader as the brain behind his nefarious engagements in Rivers State is not acceptable as Ahmed Tinubu, cannot stoop so low to partake in the style of politics of Sen. Abe which over the years has centered on destroying the State chapter of a party he worked with others to build.

One would have loved to see Abe mobilise his so called members to the various Wards of the State where the Congress to elect delegates were holding, instead, he ordered them to head to the party office and attack everyone and everything within sight, but thanks to the Security Agencies who arrested the situation and stopped the attempted vandalisation of the party as was the case in the former party office.

Eze called on the public to trash the false narrative of the incidence circulated by media urchins that "the party members were singing solidarity songs and displaying placards to express their grievances when some security men at the APC secretariat began shooting live bullets into the air to scare the protesters."

“If those youths mobilised meant any good, how come they came with the sophisticated Video machines to cover their macabre dance and started using different Social Media outlets to present their preempted goal?” Eze queried.

Dismissing the falsehood that one of the violent protesters was shot dead, Eze said the Rivers Police Commissioner has presented an account of what transpired and in their report, no one was shot.

"If anyone was actually killed as has been insinuated by some Media Organizations through a trending video clip, it is the duty of the police and other accessors to assess the situation and inform the public accordingly and that is exactly what the police has done."

The party Chief said the entire scenario was a makeshift African Magic or Z-World induced drama, else the police in their investigation would have stated otherwise and the relatives of the allegedly deceased would have spoken out by now.

Eze pointed to Abe and his fellow Collaborators in his macabre dance that 2019 will not be 2023 as Rivers people are set to elect Pastor Tonye Cole as the next Governor of Rivers State regardless of the dubious plots he has schemed with his usual partners, Gov Nyesom Wike and the PDP.

He pleaded with the media to be guided by the truth that there is no faction of APC in Rivers State. “We have just one APC structure headed by Chief Emeka Beke as any claim of any faction by anyone or group is not only dubious but unlawful.

Eze congratulates the State APC and her teeming supporters across the state for organising a successful Congress and wish the party the best in all her electoral outings ahead of the 2023 elections.