Nigeria's Dilomprizulike: artist who mesmerizes and befuddles in equal measure 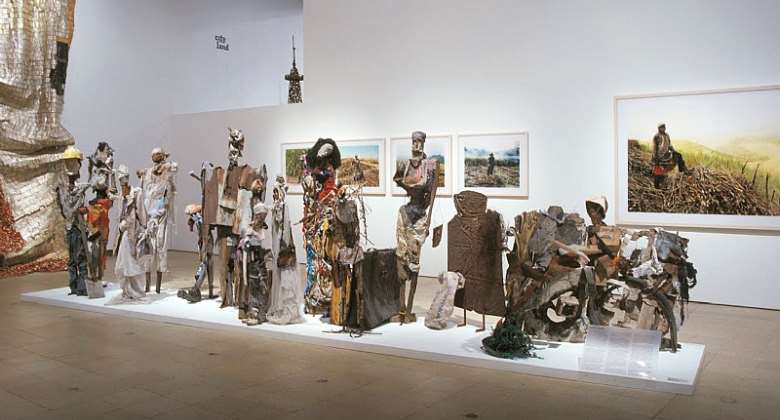 Nigerian artist and lecturer Dilomprizulike, who curated, among other things, the Junkyard Museum of Awkward Things in Lagos , wages a continuous battle on two fronts. First, as an easily misunderstood human being and then as an artist making perplexingly noncommercial art.

The Alliance Francaise Lagos/Mike Adenuga Centre, is hosting a showing of his works entitled , “Waiting for Bus”. This was a concept first premiered during the globally acclaimed “Africa Remix” exhibition held between 2004 and 2007 . It's his second exhibition at the Alliance Francaise after his initial show at the venue in 2004.

I first encountered Dilomprizuke's works at an art gallery on Victoria Island, Lagos, almost 30 years ago.

Between 1994 and 2018 he lived in Germany making art, surviving as a dreadlocked, strange looking African within a skeptical sociocultural milieu. Somehow he managed to thrive, finessing his way, often unwelcomed, through numerous exhibitions and art residencies across Europe and farther afield in Israel and the US.

Dilomprizulike selects garbage as his primary material. His foundational inspiration for choosing this method was provided by his father. As an inquisitive boy, he watched his father in their home in a village in eastern Nigeria restore broken household utensils such as pots, pans and buckets and make them useable again.

His other major source of inspiration as an artist stems from El Anatsui , the Ghanaian master artist who taught him at Nsukka and with whom he apprenticed for two years.

Since finding his métier as an artist, Dilomprizulike's startling vision has both mesmerised and befuddled art critics and audiences by equal turns.

Dilomprizulike trained and worked as an artist at the universities of Nsukka and Benin in Nigeria. He then went on to study at the University of Dundee in Scotland where he earned a Masters in Fine Art degree.

Following his global travels he returned to Nigeria in 2018 and embarked on another engrossing project. He acquired undeveloped property just beyond the Chevron Estate on Lekki Peninsula in Lagos. This ambitious project comprises three distinct phases. It serves as a residential abode, an art academy for budding artists and a museum of junk art. The Junkman from Afrika. Author supplied

The property itself is located on a pristine stretch of land bordering the Atlantic ocean. Visible from his densely vegetated compound are crashing ocean waves washing over clusters of makeshift huts sheltering “area boys” – social miscreants drawn from Nigeria's vast pool of the unemployed.

Dilomprizulike is a vegan. Nevertheless he breeds chickens and goats in his yard. In the dense thicket of trees above, families of monkeys chatter swinging from branch to branch. Some even venture into his kitchen to steal eggs and other edibles.

In a way, Dilomprizulike seems to be living the artist's ultimate dream; sequestrated on a remote location and comforted by the pleasures of solitude and the pursuit of jarring creativity.

Indeed the awkwardness of making art from junk – from discarded truck spare parts to mere scrap metal – can be quite a stretch for most people.

Dilomprizulike's art works as informed sociopolitical commentary on various kinds of material culture and the people who make, use and misuse manufactured products. It is not simply about making do with junk. It also involves a much larger aspiration of identifying strands of multifaceted history in order to discover deeper meaning within discarded objects. A way of putting it is: awakening the hidden life in inanimate objects.

Discovering artistic potential in junk also serves as a sociopolitical critique of today's ultra-materialist culture. It compels us to re-consider issues of recycling, environmental dystopia, urban waste management and the consequences of climate change. In producing so much junk how are we able to estimate the after-effects? What are the environmental costs of such industrial scale proliferation of waste materials?

These are the sort of conceptual issues Dilomprizulike's idiosyncratic art urges us to confront. Dilomprizulike trained and worked as an artist at the universities of Nsukka and Benin in Nigeria. Author supplied

Those are the immediate questions raised by Dilomprizulike's aesthetic vision. But there are other deeper issues that lie beneath the surface. His art practice has been forged via immersive studies in anthropology, philosophy, theories of art and African history amongst other disciplines.

As such, his sculptures and installations articulate multiple narratives about the vagaries of different material cultures. Not only do we manufacture all sorts of products and objects, they in turn are able to shape our destinies in more ways than we could ever imagine. Indeed they serve as historical repositories of tactile presence and encoded memories. They are subject to be activated by usage, misuse and re-invention.

Consequently, they are not just things-in-themselves but also things-for-themselves.

Dilomprizulike's task as an artist, in his words , is

to create a concept that combines traces of socio-psychological elements of society with anthropological-cum- historical values.

His installations capture this shifting sense of materiality with the same resilience, vibrancy and gift of drama through which he carefully nurtured his singular artistic vision.

It is remarkable to observe how little his artistic philosophy has changed. As a boy his father taught him to value seemingly inconsequential objects while under El Anatsui's tutelage he learnt to discover beauty in the unexpected.

Dilomprizulike's testament argues that material cultures are not static and frozen entities but bear embedded narratives that shape our lives and our environment.