Moroccan Jews return to their roots with Meknes pilgrimage 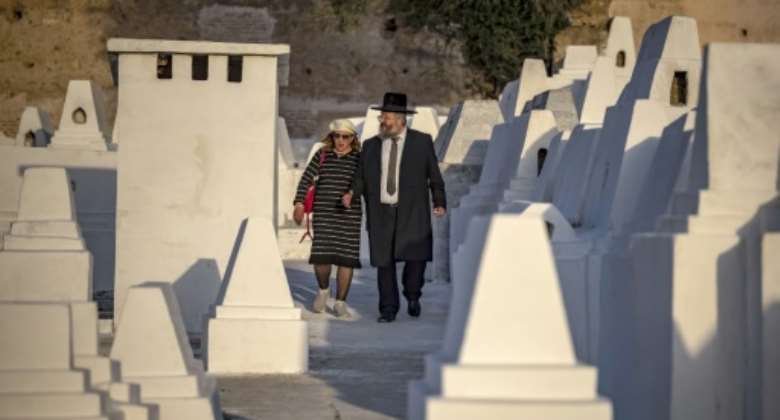 Pilgrims walk among the restored gravestones of the Jewish cemetery in the Moroccan city of Meknes, reviving a tradition that had lapsed since the 1960s. By FADEL SENNA (AFP)

Dozens of Jews travelled to the Moroccan city of Meknes this week for the first pilgrimage of its kind since the 1960s, after the Muslim kingdom restored the city's Jewish cemetery.

Their return to the graveyard, which bears witness to a centuries-old Jewish presence in the North African country, came a year and a half after Rabat restored ties with Israel, which has a large community of Moroccan Jews.

The pilgrims, including many with Moroccan heritage, took part in ceremonies under heavy security on Wednesday and Thursday to honour "tsadikim", prominent rabbis, buried at the site.

"It's a huge source of pride to come to Meknes in the footsteps of my ancestors who rest here," said Israeli rabbi Niddam, 31, who was visiting Morocco for the first time.

French-Moroccan worshipper Andre Derhy, 86, said he was lost for words.

"It's wonderful to return to the city of my birth after so many years," he said.

The cemetery was founded in 1682 for Jews of the Meknes mellah, or Jewish quarter.

The Jewish cemetery in Meknes is one of 160 across Morocco that have benfited from a renovation programme launched in 2010. By FADEL SENNA (AFP)

It was one of 160 across Morocco to benefit from a renovation programme since 2010.

Morocco, which had had a Jewish community since antiquity, was one of the main destinations for Jews expelled from Spain and Portugal at the end of the 15th century.

That is still the biggest in North Africa.

Many of Israel's 700,000 Jews of Moroccan origin have kept close ties with the country.

This week, those links were visible as 100 or so candle-bearing pilgrims walked among the white tombstones.

The Jewish community in Morocco has dwindled to just 3,000 people but Israel boasts 700,000 Jews of Moroccan origin and the kingdom hopes the recent restoration of diplomatic ties will boost the number who visit. By FADEL SENNA (AFP)

Some prayed fervently at the shrine of rabbi Raphael Berdugo, a 19th-century "master of the Torah".

"This gathering is proof that you can turn a field of ruins into a place that keeps alive the memory of Moroccan Jews," said Serge Berdugo, head of Morocco's Jewish council.

Rabat's normalisation with Israel prompted only muted protests in Morocco despite widespread public support for the Palestinian cause.

Yousseph Israel, from the northern city of Tetouan, said Morocco "has always been an example of religious co-existence".

Israel is a judge at the Hebrew court in Casablanca; Jews in Morocco are allowed to have family cases settled under Jewish law.

Israeli rabbi Niddam said that even before re-establishing ties after a decades-long hiatus, "Morocco and Israel always had peaceful relations. Lots of Israelis visited the kingdom without any problem."

For some of the Israelis among the pilgrims, it is the first time they have been back to Morocco since they emigrated decades ago. By FADEL SENNA (AFP)

Morocco is now hoping that newly-established air links with Israel will boost the number of Jewish visitors from around 60,000 per year to as many as 200,000.

Gilles Berdugo, an Israeli citizen originally from Meknes, said he was returning to the country for the first time since he left in 1970 at the age of 11.

"All my memories came back, it was like I'd never left the country," he said.

For his son, Avishai, it "is like we've finally found a missing piece of the family puzzle".

Latest Photo Reports
Catch up with all the political quotes from our politicians.
Advertise here
More from Morocco
ModernGhana Links
Brutal Attacks On Africans In Morocco Highlights Crisis In Africa
AU urges probe into deaths of Africans at Spain-Morocco border
AU calls for investigation into migrant deaths, violence on Morocco-Spain border
TOP STORIES