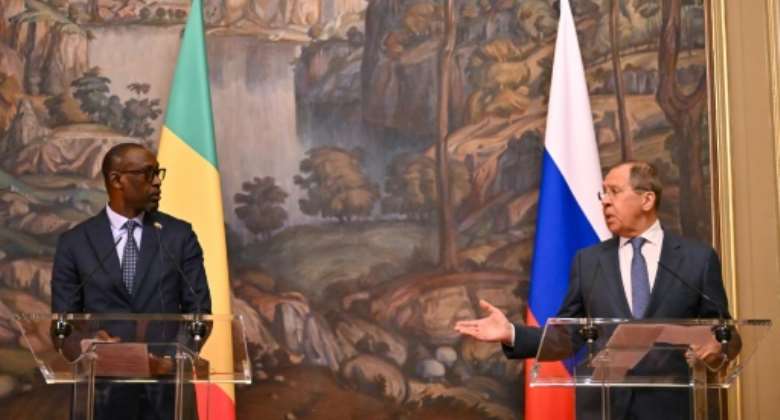 Russian Foreign Minister Sergei Lavrov told a press conference with his Malian counterpart Abdoulaye Diop that Moscow is ready 'to increase the combat capabilities of the Malian armed forces'. By Yuri KADOBNOV (POOL/AFP)

Russian Foreign Minister Sergei Lavrov on Friday accused France of having a "colonial mentality" towards Mali while hosting his Malian counterpart Abdoulaye Diop in Moscow.

France's "dissatisfaction with the intent of Malian leadership to seek help from external security forces is nothing other than a recurrence of colonial mentality," Lavrov told reporters.

He warned against the "real danger of enclaves of anarchy appearing where fighters of illegal armed groups will act freely".

"This threatens its territorial integrity of the country and we have already said this several times to our French colleagues," Lavrov said.

"We understand but we do not appreciate the attempts of France and other EU countries to claim a dominant role in Africa and other regions," Lavrov said.

He added that Moscow is ready "to increase the combat capabilities of the Malian armed forces", particularly in the training of soldiers and law enforcement.

He also assured that Moscow will continue to deliver mineral fertiliser, petroleum products and wheat to Mali amid growing concerns of a global food crisis.

In February, France announced a pullout of its forces from Mali after once-close ties between Bamako and Paris soured.

Tensions rose to near-breaking point after the junta brought in paramilitaries that France and others say are mercenaries from the controversial Wagner group.

Reputed to be close to Russian President Vladimir Putin, Wagner and its mercenaries are suspected of abuses in Mali, Libya and Syria.